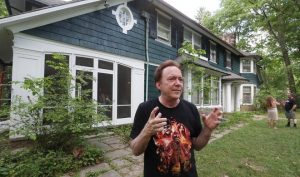 The house looks perfectly ordinary on a street lined with anything but ordinary homes.

Fairmount Boulevard is home to relics of a bygone era when the movers and shakers of Cleveland a century ago looked east for greener pastures and a place to build stately estates.

The homes look like something out of a movie with grand architecture and have relics of the bygone era when there were back staircases where servants could quietly move about and not disturb the owners.

Life is pretty quiet nowadays along the boulevard on the city’s edge in Cleveland Heights. Except for the occasional blood-curdling screams from one home that is about to become very familiar to fans of horror B movies.