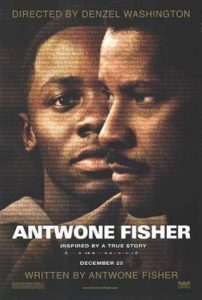 We look back at movies that #FilmedInCLE and what some of the people involved are doing now.

A Cleveland native, Fisher’s screenplay, based on his memoir “Finding Fish,” tells the story of Fisher as a young man in the Navy and his struggle to master his temperamental nature, address past abuse as a foster child, and find his true family. He continues to write, produce and direct, and in 2003 was awarded an honorary Doctorate in Humane Letters from Cleveland State University.

Luke was told to audition for the film by Fisher himself (having gotten to know him while Fisher was a security guard on the Sony Pictures lot), and it proved a breakout role for the young talent. He has gone on to roles in numerous films and television series including “Friday Night Lights,” “Miracle at St. Anna,” “The Americans,” and “Notorious.” He most recently appeared in the acclaimed Netflix series “13 Reasons Why.”

Washington’s directorial debut was met with critical acclaim. The late Roger Ebert said of it: “A film that begins with the everyday lives of naval personnel in San Diego and ends with scenes so true and heartbreaking that tears welled up in my eyes both times I saw the film.” His most recently directed work, “Fences,” was nominated for four Oscars, including Best Picture, Best Adapted Screenplay, Best Supporting Actor for Denzel himself, and an Oscar win for Viola Davis for Best Supporting Actress.