You may have seen some of the recent postings on our site that say: “EXTRAS NEEDED” or “CASTING CALL FOR EXTRAS”. Many of you may have been an extra on one or more of the films that have shot in Ohio, but for those of you who do not know what the experience is like, this blog post is for you! 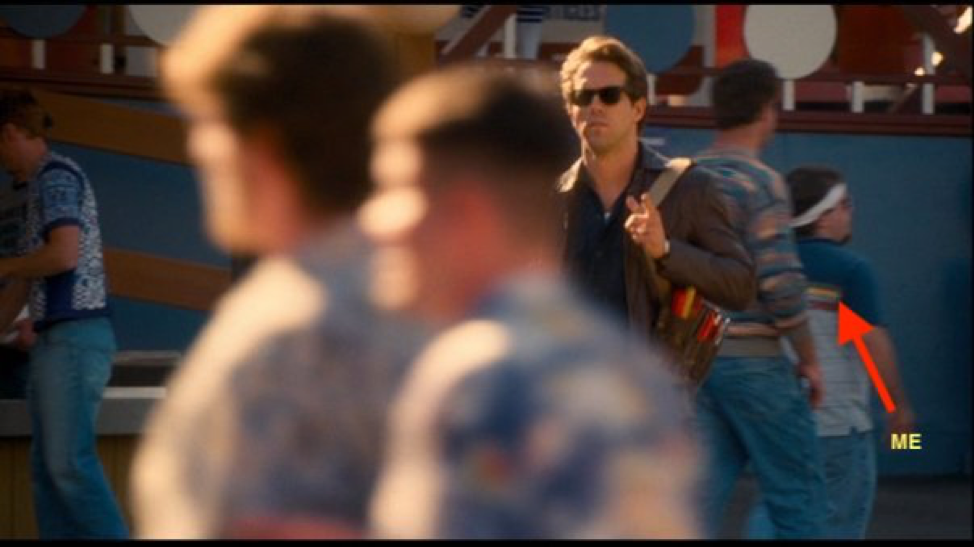 Here’s me as an extra on ADVENTURELAND with Ryan Reynolds when it shot in Pittsburgh several years back.

Extras play an important role on a film set. Of course, the majority of the attention in a film is placed on the main actors, but the people in the background add an authenticity to many of the locations that you will see throughout a movie.  If you were filming a basketball scene at The Q, for instance, and you solely relied on your principle actors, you’d have one empty looking arena.

I too was once an extra in the film ADVENTURELAND. I got to walk past Ryan Reynolds several times.

Here are a couple of things to expect and some words of advice if you are accepted to be an extra:

1.  Give yourself enough time to be on time.
The work day on a film set is very long; background actors are often asked to come in before even some of the crew arrive.  This will allow you enough time to arrive at the parking destination, and get a shuttle to what is called the ‘Holding Location’ or ‘Extras Holding’. Once there, you will have to fill out paperwork, and since each day on a set is different, the Assistant Directors may need you on set right away, or they may not need you until later. The rule of thumb: just by being on set on time makes you prepared for any and all changes.

2. Expect a 10-12 hour work day, at least. Working on film sets is fun, however, it is often a lengthy process, and there are some crew members who will work 12-15 hour days. Some first-time extras/background artists don’t realize how long a day on set can be, so just by preparing yourself for the potential of a long day will give you an advantage.

3. Food and drink will be provided (usually). Extras are often expected to arrive early having already eaten breakfast, but some films will provide courtesy breakfast; it’s always best to err on the side of caution and eat before you get to set. Lunch will be provided, and there is craft (snack) service with coolers of water available throughout the day for background.  If you have any special dietary restrictions or needs, come prepared in case the provided choices are limited. Again, days on set can be long, and since you know yourself best, plan snacks accordingly and drink plenty of water. No one likes a hangry extra!

4. Soak up all you can once on set, and HAVE FUN! Being an extra can sometimes turn into eventually getting hired onto a film, whether it be on the crew or perhaps a speaking role. While you may feel like you are “just an extra”, those people who bring a good enthusiasm and energy might get spotted by a crew member that recognizes hard work, and it could lead to something more.

Hopefully this will give you a little “extra” bit of insight into what it’s like being on a film set. There are several opportunities coming up this summer, so don’t miss out!

Mike Wendt is the Production Coordinator at Greater Cleveland Film Commission. Mike has been working in the Cleveland Film Industry for the past 11+ years in a variety of positions, but mainly working in the locations department. Mike started in locations as a Production Assistant on “Captain America: Winter Soldier”, and worked his way up the ranks, ultimately serving as Location Manager on films such as “My Blind Brother,” “Legacy,” and Co-Location Manager on “Them That Follow.”