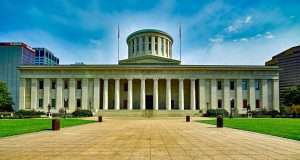 Ohio House Bill 525 would create jobs for Northeast Ohio,
and your representatives need to know you support it!

House Bill 525 would increase the Ohio Motion Picture Tax Credit from $40 million to $100 million, allowing for the creation of many more new jobs for the state, but more specifically, for Northeast Ohio.

H.B. 525 would more than double the current film tax incentive and would also make some Broadway shows eligible for the benefit as well. Broadways shows that run in Ohio for at least five weeks, with at least six performances a week, would qualify for the tax credit, as would off-Broadway shows looking to work out the kinks before opening in New York City. With Cleveland having the second largest theater district outside of New York, that means shows could run for up to five months.

The money spent on the incentive makes Ohio more competitive than other states when Hollywood and Broadway productions scout for production locations. If H.B. 525 is made into law, we will have one of, if not, the best incentive in the country because it will encompass theater production in addition to film and TV production.

The passage of H.B. 525 will allow for the creation of a more permanent Ohio workforce in film, TV and live theater. With the tax credit being distributed twice a year, instead of the current annual award, it allows for greater flexibility to include more new projects as they become available, increasing the amount of production that can be happening at one time.

H.B. 525 will require applicants to show the positive economic impact that their production would have on the state; the amount of money a production will receive will be based on their impact.

Use these templates when you contact your representatives by email, phone, or mail!