Before last weekend’s record-shattering box office opening with Avenger: Endgame, Cleveland-native Anthony Russo (of the directing duo the Russo Brothers), talked with Michael Sangiacomo at The Plain Dealer about Endgame, and the next movie that he and brother Joe Russo want to bring to Cleveland, Cherry. ORIGINAL ARTICLE HERE.  The Russos also talked out Cherry and their wishes to make it in Cleveland in a recent interview with Collider (see below).

Last year’s “Avengers: Infinity War” earned more than $2 billion worldwide, which is more than the gross national product of Greenland and other countries and the 2017 budget of Cleveland.

The sequel, “Avengers: Endgame,” is expected to do even better with its opening this weekend. So why would directors Anthony and Joe Russo choose now to give up on the Marvel movie franchise?

Anthony Russo, born and raised in Cleveland, took time from putting the finishing touches on “Endgame,” to talk about the movie and their cinematic future.

“We’ve done four movies for Marvel in seven years,” he said. “It’s been the greatest time of our lives. We have loved the material, the comics, since our childhood. Making movies for them has been a dream. But ‘Endgame’ is the ending of the current Marvel Cinematic Universe that started with ‘Iron Man.’ It all comes together here, all of it. We have no plans to do another, but on the other hand we might like to work with Marvel again someday down the line.”

Next up for the brothers is a movie called “Cherry,” written by fellow Clevelander Nico Walker. They hope to shoot the movie in Cleveland. 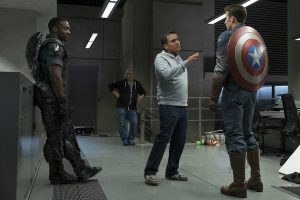 “We’re working with the Greater Cleveland Film Commission to see if we can get the tax incentives to do it in Cleveland,” Russo said. They filmed “Captain America: Winter Soldier” in the city. “ ’Cherry’ is a very intuitive portrait of a man who joins the Army and has a bad experience in Afghanistan. He returns home, where he suffers from PTSD, which leads to a heroin addiction. To feed his habit, he robs banks. We feel like it’s a very timely movie considering the opioid epidemic in our country.”

Anthony talked about “Cherry,” but clammed up when asked about the three-hour-plus “Endgame.”

“I can’t speak to it, specifically,” Russo said. “Joe and I want to make sure that people can have the full experience in the theater.”

But will the Marvel universe exist after “Endgame?” Absolutely, but it will look different. And Russo declined to elaborate.

“As I said, this is a closure of the Marvel universe, but with every closure there is a new beginning,” he said.

As anyone who’s seen “Infinity War” can attest, there is not much of the Marvel universe left after the end.

Spoiler alert for the benefit of the seven people who have not yet seen it; what follows are some facts about the previous film that will impact the new movie.

The evil, godlike villain Thanos took possession of the Infinity gems, which gave him control of everything: time, space, reality, the whole shebang.

Thanos believed that the universe would be a better place with fewer people, so at the end of the movie he snapped his fingers and half the living creatures on Earth dissolved.

The survivors include Iron Man, Captain America, Thor, Hulk, Black Widow and Hawkeye, Ant-Man (Scott Lang) and War Machine, who, with an assist from Captain Marvel, will take on Thanos.

Suspicious people have noted that the “survivors” were the big-paycheck actors whose contracts were ending, so maybe they are really the ones on the way out.

“Keep in mind that there was a rift between Cap and Iron Man in ‘Civil War’ that has never healed,” Russo said. “They did not reconcile in ‘Infinity War,’ and that prevented them from working as a team. Perhaps that is the reason Thanos won. I’m not saying anymore.”

Russo said the brothers have been busy.

“We used our success at Marvel to set up our own company, AGBO,” he said. “The origin of that name is a funny story. When we were students at Case [Western Reserve University], we started a sketch comedy troupe. We were trying to get publicity, and Joe had an idea.

“He wrote a scathing review of the show for the Case student newspaper,” he continued. “The reviewer despised the show. But we were able to talk about everything that was special about the show, disguised as a nasty review by someone named Gozie Agbo. Joe also used that name when he performed as an actor, so that’s how we ended up with AGBO.”

Since Marvel movies are not in the Russo Brothers’ foreseeable future, is there any chance that the brothers would bring their directing skills to DC and Warner Bros., whose superhero films have paled before Marvel’s?

“We consider all possibilities,” he said. “We would consider doing a DC superhero movie. After all, when I was a kid, my favorite character was Batman.”

Russo said it’s also too soon to talk about the repercussions of the purchase of Fox by Disney, meaning they can now bring the X-Men, the Fantastic Four and others into a joint universe.

“It’s all too new,” he said. “But my brother and are have always been huge fans of Wolverine.” Never say never, he said. “There are no plans for that, but who knows?”

Last April, after the release of “Infinity War,” the brothers hosted a showing of it along with both of their Captain America movies at the Cleveland Institute of Art Cinematheque. He said something similar is planned for the opening of “Endgame.”

“We will return to Cleveland and host a showing; we’re still working out the details,” he said.

In order to bring the Russo Brothers back to the CLE to make their next movie, Cherry, we must expand the Ohio Motion Picture Tax Credit.
See how you can help by contacting your lawmakers HERE.