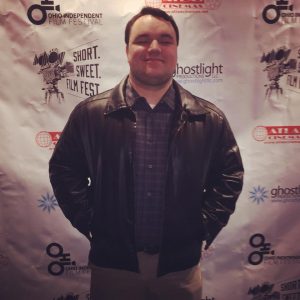 My name is Tom Zavertnik and I’m an upcoming Senior at Cleveland State University, currently going for my Bachelor of Fine Arts in Post Production. Though I’ve always been fond of movies, my interest in working and creating films mainly began when I went to the Medina County Career Center for Video Production. Taking what I learned from there, and first going to the University of Toledo for my freshman year before transferring to Cleveland State University, prepared me to escalate my craft in filmmaking at a much higher level. I am glad to expand my knowledge of filmmaking this summer at the Greater Cleveland Film Commission.

I live in Brunswick, Ohio, which is a fine spot in terms of going to the movies since there are so many movie theaters around me. My favorite hobbies include video/film editing, going to rock concerts and reviewing movies! I like to write reviews and breakdown films, ranging from huge blockbusters to independent low budget films. There is a great site called Letterboxd, and if you are someone that likes to log what you watch or read what other film lovers have to say about a certain film, definitely check it out, I use it all the time. Some of my favorite films are 2001: A Space Odyssey, Apocalypse Now, Magnolia, Blade Runner 2049, Star Wars, The Lord of the Rings and Mishima: A Life in Four Chapters. My favorite TV show of all-time is Batman: The Animated Series. Two TV shows I had just recently started watching are Barry and Chernobyl; pretty much anything HBO makes is usually what I’m currently watching.

I wanted to intern for the Greater Cleveland Film Commission because it looked like a great opportunity to meet a bunch of new people involved in the film industry and to help bring more filmmaking opportunities to others. What I hope to get out of my internship is to learn what happens from behind the scenes first hand, and how film production is coordinated and executed on a professional level.

My time and experience as an intern at the Greater Cleveland Film Commission will no doubt help me further my path onward in the film industry, as I pursue my dream of being a professional feature film editor.