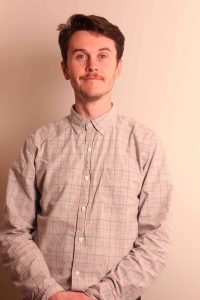 I first found out about the Greater Cleveland Film Commission two years ago when I was working at the Ohio City Bicycle Co-op. Mike Wendt, the production coordinator here at GCFC, came to shoot a promo video about a cycling team, and he needed an appropriate backdrop for interviews. The bike co-op, with all its miscellaneous bicycles and parts hanging around the place, was the perfect place, and before he left he gave me his business card. That summer a number of other films came through the bike co-op looking for props or to consider using the space as a set. I called Mike to ask him for advice about what was the going rate to rent our space or what it might cost to buy or rent props. Mike was a really helpful resource, and I thought it was awesome that there was so much activity based around movies in the Cleveland area.

I’ve always loved movies, especially going to see them at the movie theater. There is something magical about the ritual—the popcorn, trailers, hushing, darkness, strangers—all of it coming together for the common purpose of another world unveiling itself on a screen the size of the wall. One of my first movie experiences was seeing Falling Down when I was six. That was probably an inappropriately violent movie to see as a kid, but I loved it! I also remember seeing Mighty Ducks, and how it made me want to go play hockey on a pond.

My most recent favorite movies have been Good Time and A Pigeon Sat on a Branch Reflecting on Existence. I love to see what’s new at the Capitol Theatre and the Cinematheque. I’ve been volunteering for the Cleveland International Film Festival every year for the last five years, and before that, I volunteered at the Independent Film Festival and Irish Film Festival in Boston. On TV, I really liked Downton Abbey, and recently, Fleabag. I also am a huge fan of The Kids in the Hall.

Currently, I take classes part-time at Tri-C Metro in the media arts and filmmaking department, and I worked there in the Student Production Office, which was an awesome experience. I also take other classes that interest me, including music production, culinary arts, and currently ceramics, and not to brag, but I make a very nice coffee mug! Before this, I studied journalism at St. Bonaventure University and creative writing at Boston University.

I moved to Cleveland five years ago from outside of Boston, Mass. I live in Cleveland, in the West Park neighborhood. I love to garden, cook, listen to music, write and see poetry read out loud, hike, and ride my bicycle around the city, sometimes like Lance Armstrong and sometimes like Pee-wee Herman.

I love learning, and I hope to learn as much as possible while at GCFC. I would like to grow any skills related to video production, fundraising, and I’m really looking forward to scouting sets. My background is in writing, so I hope to learn more about writing for movies and non-profit administration. My dream is to make the strangest documentaries and drama movies with the least amount of money possible.