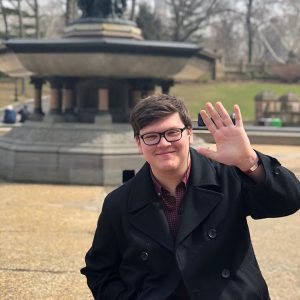 Hello!  My name is Micah Simmons, and I am a rising sophomore at the Baldwin Wallace Conservatory of Music, where I study Music Composition and Film Studies.

Ever since I can remember, I’ve loved movies and music.  My exposure to good films and good music by my parents was instrumental in my upbringing, and my love for both art forms is still an integral part of who I am.  Nevertheless, when I started college at BW, I started out as a Music Education major and quickly found out that it wasn’t for me.  I knew that I was super passionate about both music and film, and so I guess in the back of my mind I already knew what I really wanted to do. I wanted to combine my two favorite art forms and study the art of composing music, and specifically, composing music for film.  Ever since I made the switch (which was pretty early in my college career), I have been working extremely hard in my classes, composing every day, and keeping up my research on films and the industry itself, which led to me applying for an internship with the Greater Cleveland Film Commission, which I am very thankful to have received.

Right now, I live in Berea which is where I go to school, although I am originally from Portsmouth.  Both in and outside of school, I am involved with many different things.  I have many friends that are active in the Cleveland/Northern OH DIY music scene, and I have started being more active myself, with solo projects in the works, and bands that I am a part of, including Strictly Business and a new project that a friend of mine is starting with a multitude of members, Electric Freak Show.

Outside of playing and writing music, I love going to concerts, which I try to do frequently.  Of course, I also love movies and frequently have small viewing parties with friends of mine.  I have a good collection that continues to grow, but some of my favorites are Her (my personal top favorite), anything by writer/director Paul Thomas Anderson, Blade Runner 2049, Inside Llewyn Davis, Rashomon, Secret Sunshine, Taxi Driver, Vertigo, Burning, and 8 ½.  I love many film scores as well, such as the scores for Mishima: A Life in Four Chapters, Vertigo, Taxi Driver, Her, Phantom Thread, The Master, and If Beale Street Could Talk.  As far as my favorite TV shows, my two favorite shows are The Leftovers and Twin Peaks, especially that limited return series that just aired a couple of years ago. Although I have seen and am watching more, those are standouts to me.

With all that I have said, I hope you can see a little bit of how I feel about the respective arts of film and music.  They are both very important to me, and that is the main reason why I wanted to intern at the GCFC.  I wanted to be in an environment with other people who, like me, love the arts. Along with that, I applied to the GCFC so that I could learn more about the film industry, and I hope to learn what happens in the background of film productions, and I want to use that knowledge to propel me forward as I work towards a career as a film composer, writing scores for movies.

I am extremely grateful for this opportunity, and I’m sure I will learn a lot during my time with the GCFC.

I frequently end posts on social media with the same message, and this post is no different. So, with that being said, support new music, and support the arts!!

Check out the most recent performance of Micah’s latest composition “End”.