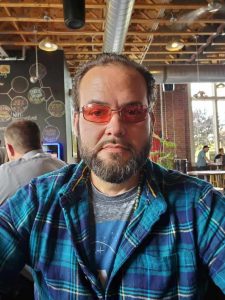 Hi, my name is Mark T. Stoffer and I was born and raised right here in the great state of Ohio. I graduated from Cambridge High School in Cambridge Ohio, twenty-four years ago and since then I have served my country in the United States Army (82nd Airborne Division Combat Veteran). I have also served my community as a police officer for several years, and also attained three collegiate degrees; an associate in Criminal Justice, Bachelors in Forensic Psychology, as well as a Bachelors in Religion.

I have a strong passion for film but more importantly, combining my educational background with film and investigative journalism and reporting in the form of documentary films. When needing to educate and boost my career in the film industry, I turned to the Greater Cleveland Film Commission. Being an intern here at GCFC afforded me the best opportunity to learn from those who know the film industry the best so that I can strengthen my skills as a documentary filmmaker. My goals and aspirations are to make short and documentary feature films that reveal truth to the viewer. Truth in regards to the many things that mainstream news media either totally falsifies or skews to fit some agenda.

What I appreciate watching on television and in theaters now are of course documentaries, but I also like the History Channel “Project Blue Book.” I believe this is a great example of finding truth shown in a fiction format based on non-fiction events. Plus the acting is spot on. I also enjoy watching movies and television directed by Taika Waititi. In my most humble opinion, he combines comedy and story with great cinematography in a way that has not really been captured before.

I have many favorite films and television shows, too many to list here. What I can say is this: It would be an honor and a privilege to be talked about in the same breath with elite directors and actors such as Werner Herzog, Taika Waititi, Tom Hardy, Aiden Gillen, The Russo Brothers; this would be a dream come true. Should it not, however, it is still an honor to say that I have been an intern at GCFC.