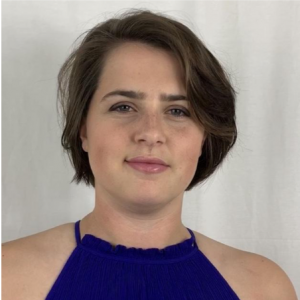 Hi! My name is Madison Woods and I was born and raised in Cleveland, OH. I am currently in my second year at CSU studying Writing and Directing in the School of Film and Media Arts. I have a Bachelor of Arts in Media Arts and Studies from the University of Kentucky as well. Go Cats!

I love to play and watch sports, including racquetball, dodgeball, kickball, and volleyball and my favorite sports teams are the Browns, the Indians, the Kentucky Wildcats (football and basketball) and the Dodgers. Some of my favorite things to do are play board games, go kayaking or sit by a campfire.

My favorite movie of all time is Bridesmaids. I love the way the writing, directing and performances came together to make, in my opinion, one of the funniest movies of our generation. As previously mentioned, I’m a big TV head. I love many shows; Glee and Teen Wolf were my high school favorites. I binged 5 seasons of Pretty Little Liars on Netflix in two days one finals week at UK. Recently, I’ve loved American Horror Story, Stranger Things, Derry Girls, Glow, and I am working my way through The Boys on Amazon.

I wanted to intern with the Greater Cleveland Film Commission because they are an incredible resource and powerhouse for films in Cleveland. I believe I can learn endlessly from the staff and network with people I might not have had access to before. I hope to learn more about the production processes and how they’re made possible by the GCFC, and I hope to make friends and long-lasting contacts during my time here.

I’ve loved TV since I was very young and want to pursue a career in writing, directing and acting in television and film. I currently study acting at the Houde School of Acting in Cleveland. Ideally, I’d love to become one of those “do-it-all” producers, and to support that, I am learning about every integral part of film production to make sure I’m the best producer I can be!

Thank you for reading. I look forward to getting to know you too

Check out some of Madison’s Writing/Directing and Acting work below!