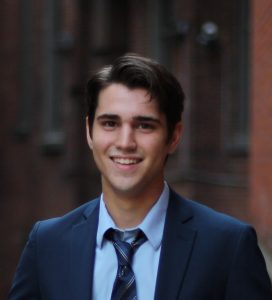 My name is Logan Willis, and I go to Mentor High School. I am currently on my Senior Project and I’m super excited to be working with the Greater Cleveland Film Commission.

I first found out about GCFC when I did the Band Of Brothers Workshop back in the Fall. It was an amazing experience and I checked the website weekly for new events. When it was time to search for places that would host me for Senior Project, I was very happy to discover that the GCFC accepted interns.

I am so thankful for this opportunity to work with them, and I hope to gain more experience in any area of Film Production. I enjoy all parts of Film Production and will be attending Cleveland State University in the Fall of this year studying Film Acting/Directing.

When I was little, I used to watch Monsters Inc. and Toy Story almost daily. These two movies were the equivalent to Frozen to me; they never got old, no matter how many times I watched them. When I got a little bit older, my Dad introduced me to the Pirates of the Caribbean franchise. The first time I saw The Curse of the Black Pearl I cried, and it wasn’t the good cry like, “wow this movie is amazing!” No, this was the “I’m scared” cry and my Dad had to turn off the movie. By the time the second movie came out (and I was three years older), I ended up loving the movie and the entire series. I saw the next three movies in theaters as soon as they came out.

I also love The Emperor’s New Groove and watch it just about once a month. It’s a very underrated Disney movie and deserves way more attention. I’ve watched it more than fifty times, and I still laugh my butt off.

I also just recently started watching one of the Guardians of the Galaxy movies each month to prepare for Halloween. I take Halloween very seriously and no one understood that until I met my best friend this previous Winter who also likes Halloween (but not as much as me obviously). My most expensive costume cost me over $400 and that was when I went as the Tenth Doctor from Doctor Who two years ago. This year will be another expensive year because I plan on going as Star-Lord basing my costume off of the second movie.

Disney will always have a special place in my heart and will always continue to inspire me. Not just the movies, but the parks and even Walt himself. Walt was a man ahead of his time and he will always be my hero. The Disney parks bring out the kid in me. Ask anyone that knows me and they will tell you how much I adore Walt Disney’s Carousel of Progress. It’s my all-time favorite ride ahead of the Tower of Terror and Space Mountain.

Disney movies get me through hard times, and I would be a totally different person if I didn’t have them in my life. I’m so passionate about Disney I have even started debates on Disney topics. My most recent being; debating some theatre kids on if Mulan is a princess or not. She obviously isn’t a real princess, but she does deserve to be a part of the Disney Princess Franchise.

I don’t watch much television, but I love Parks and Recreation. It is my all time favorite show and it is far more superior to The Office. To all those who oppose that statement, all I have to say to you is this… “Chris Pratt”. I rest my case.

Brooklyn Nine-Nine is probably my second favorite because Andy Samberg is a comical genius and there is a good storyline. I’ve given The Office chance after chance, but it always disappoints. I’m sorry to those who like it, but it’s just not that good; it’s funny, I’ll give it that, but it’s just not good. I watched it up to the seventh season, and I just can’t bring myself to watch the next episode.

My dream for the future is to watch a movie and be able to spot my name in the credits. I want more than anything to be a voice actor. I want to be a part of a movie like Monsters Inc. or Toy Story, and have kids look up to those characters that I play like I did as a kid. I want to be a part of movies and give back to the industry that shaped my life.

If I don’t make it into voice acting I’d like to do pretty much anything in film. I have experience in Pre-Production, Production, and Post-Production, and I like it all. I just want people to watch a movie and get inspired, or be on the edge of their seats, and know that I had a part in that.