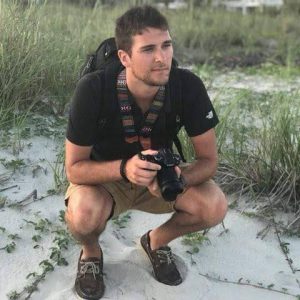 My name is Kyle Birch, and I have been a Cleveland resident my entire life. I am going into my senior year at Cleveland State University completing a double major in Communication and Film. I have been interested in film and film-making since I was a kid. I grew up with a wild imagination and would dive head first into whatever film I was into. I was always told that film would not make a good career. However, when I went to Cleveland State and learned how much film in Cleveland was growing, I couldn’t help but want to be a part of it. Ever since then, I live and breathe video production.

They are two major factors that really influenced my decision to pursue film-making and video production. When I was growing up, Peter Jackson’s Lord of the Rings trilogy was released. I fell in love with these films and the way I could escape into a whole other world. Similar to how Peter Jackson was influenced by Ray Harryhausen, I was influenced by Jackson with the desire to create my own worlds, characters, and creatures within the magic of film-making. The second major influence was the way watching a film or creating a film can make someone feel. I loved sitting in a theater and having a heartfelt moment, a dramatic moment, or any major event make you feel something—whether it was sadness, anger, fear, laughter, etc. I wanted to be able create these emotions for other people the same way film-makers did for me.

After I graduate, I plan to continue my work as a church and sports videographer. My goal one day is to have a career within the MLB making videos. I also plan to utilize my resources within the Cleveland Film Commission to help me get on film sets whenever Cleveland is hosting one.

The Cleveland Film Commission has taught me a great deal. I learned how much work goes on behind-the-scenes to try to get a film made in Cleveland. The GCFC taught me to always have a film-maker’s eye as well. Everywhere I go, I am subconsciously scouting for a possible location for one of my short films. I also got the opportunity to network with other film-makers in Cleveland setting me up for future work.