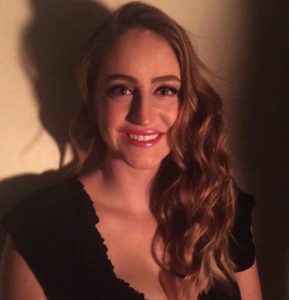 Katarina was born and raised in Cleveland, Ohio. She went to Brecksville Broadview Heights schools, where she participated for years in the music and drama program. Besides being in choir from 5th to 12th grade, she also participated in show choir, musicals, and local theatrical productions. Katarina always enjoyed performing, but also excelled as a writer since childhood.

Her parents, Vasilije and Jelica, emigrated to Cleveland from Former Yugoslavia. Her mother came in 1969, at 14 years old, and her father came in 1979, at 27 years old. They got married in 1980 and started their own family and dental laboratory technology business less than a decade later. They raised three daughters, Katarina being the youngest. Katarina’s oldest sister, Aleksandra, is a business professional with education in International Business. She lived in Spain for 6 years after finishing her masters, doing strategy implementation consulting for Fortune 500 companies and startups in Europe and USA. Her other sister, Nikoleta, is a physician completing Dermatology residency and soon starting a Dermatopathology fellowship. Katarina and her sisters played basketball and tennis competitively growing up, and always enjoyed swimming on family vacations and hiking and biking at The Cleveland Metroparks while at home together. Katarina and her family are also big Cleveland Cavaliers fans and have many memories going to season and playoff games together having grown up with season tickets.

She earned her Bachelor of Science in Psychology and Neuroscience from Baldwin Wallace University in 2016, before completing a Post-Baccalaureate in Health Sciences in 2019. Katarina is a published author in a scientific journal for her work in Clinical Neuroscience research. She is fascinated by human behavior, which ultimately drives her curiosity and passion for storytelling. Katarina participated in the music and drama program throughout her time in college, where she took voice lessons and courses in music and theater performance plus production. Katarina has experience working with other nonprofit organizations in the past, such as The American Cancer Society, YMCA of Greater Cleveland, and now the Greater Cleveland Film Commission. She hopes that her role as an intern at GCFC and her role as Board Secretary of Women in Film and Television Ohio will bring new opportunities as she develops her place in the film industry.

Katarina wanted to intern at Greater Cleveland Film Commission because she wants to help Cleveland become more known and respected in the film and television world. One great thing about Ohio, is that our budding film industry has both Hollywood skill and talent with Midwest prices and perks. Since the recent efforts of the GCFC and others successfully secured 2020’s Motion Picture Tax credit, Katarina wants to be a part of expanding its funding pool to sustain the Ohio tax laws relating to film production that have always encouraged filmmakers to come here to shoot. She is proud to join the Greater Cleveland Film Commission in helping drive economic development in Northeast Ohio through the film and television industry, and she believes her diverse background in the behavioral and health sciences will allow her to apply her knowledge of human behavior to business in this industry through marketing and other means.