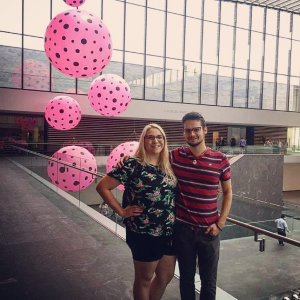 Though I have lived in a few different areas of NE Ohio, I’m originally from Euclid, just a half hour from downtown Cleveland. I grew up in the theatre, acting in local productions since I was six years old, which I loved, but as I got older I realized that there was something that I felt was lacking in theatre. It was one night when I was watching Event Horizon that I realized what it was. It was the world that film could create and show to the audience instead of making the audience rely on their imagination, and everything that entailed.

Unfortunately this was the mid-2000s, so there wasn’t really a well-known movie presence (save for A Christmas Story of course), but I remember feeling so excited when my mother took my brothers and I to go see where Spider-Man 3 was being filmed and thinking how cool it would be if this could be a regular thing in Cleveland. As I grew up, I got my Associates Degree at Lakeland Community with the intention of going into business management at Cleveland State, but that all changed when I read the announcement of how there was going to be a film school.

I knew immediately that’s what I really wanted to do, so I signed up and I couldn’t be happier that I did. It’s been inspiring to watch the film industry here grow substantially since the first Avengers and has already been such a rewarding experience learning and working with the equipment and making friends within the program and knowing that they will be film workers as well.

It’s an up and coming time for film in this city, and I can’t wait to put the knowledge and experience that I’ve gained from the film school and from the GCFC back into Cleveland.