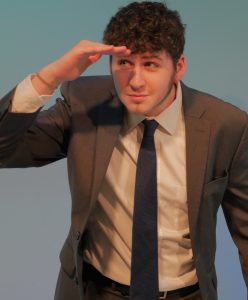 My name is Gabe Shapera and I am a rising Junior at Emerson College studying Film Production. I am very excited to continue my education by interning at the Greater Cleveland Film Commission this summer.

Although I go to school in Boston, I live in Beachwood, Ohio and am excited to be back in Cleveland for the summer. By interning at the Film Commission, I hope to help positively impact the city of Cleveland through my passion for filmmaking. In my free time, I love to work on film projects with friends. I have had incredible opportunities to work on student film sets in many different positions and on a few professional sets as well.

I wanted to intern at the GCFC this summer so I could learn more about the film industry in Cleveland and Northeast Ohio. I love working on sets and being involved in productions, however, there is so much work to be done before you get to that point; I am excited to learn more about these aspects of the filmmaking process. Additionally, the Film Commission plays a key role in economic development and job creation in Cleveland and I can’t wait to see how big of an impact the film industry really has on this city.

One task, in particular, I am looking forward to working on is recreating movie scenes shot in Cleveland. By acting out some of these famous scenes, I hope to inspire filmmakers to bring their productions and more business to the city. My first scene recreation will be from the Fate of the Furious where I will be racing the company van down Lakeside Avenue.

After college, I hope to work in the film industry no matter where I live. In addition to interning at the Film Commission, I am preparing for a career in film by watching every movie ever made (except horror films). I know this is a daunting task I’ve set for myself but I am dedicated to my work. Some of my favorite movies I’ve seen so far include E.T. the Extra-Terrestrial, Star Wars, and Spider-Man: Into the Spider-Verse. As you can see, this list is not very diverse, so I am open to any suggestions. One thing to keep in mind, however, is that I don’t like horror movies so please keep those suggestions to yourselves.