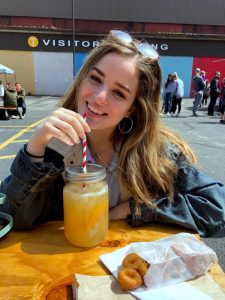 My name is Emilie Evans and I am currently a senior at Shaker Heights High School. For my senior project, I am fortunate enough to have the opportunity to work with the Greater Cleveland Film Commission.

Next year I will be traveling to Southern California to attend Chapman University’s Dodge College of Film and Media Arts to major in Television Writing and Production and I couldn’t be more excited.

As a kid, I was addicted to storytelling and it was evident in everything I did. At my soccer camps during break time, my teammates learned to look to me to hear whatever fantastical adventure I had contrived that day. When the opportunity came around at a campfire, I would jump at the chance to share my scary story first, eager to watch the surprised looks on those firelit faces. My mom’s favorite story to tell about me was when I was just 3 years old and would flip through the pages of Madeline saying the words just as I had watched her do a hundred times, except of course I wasn’t reading as she had, I was citing them from memory.

Growing up, if I didn’t have my nose buried in a book, I would be getting lost in the magic of the glowing TV on the wall. This passion I’ve always had for stories has intertwined with my love for writing as I’ve grown up and by the time I reached high school, I was positive that I wanted nothing more than to write for the screen.

I’ve taken the opportunity to practice my writing as much as possible, whether that be signing up for the school newspaper freshman year, or enrolling in our playwriting class where I learned to write for the stage. During that class, I wrote my first short play which I eventually submitted to our school’s 10-minute play series and was fortunate enough to have it chosen and produced. I love both writing on my own and working in groups to create and film fun shorts. 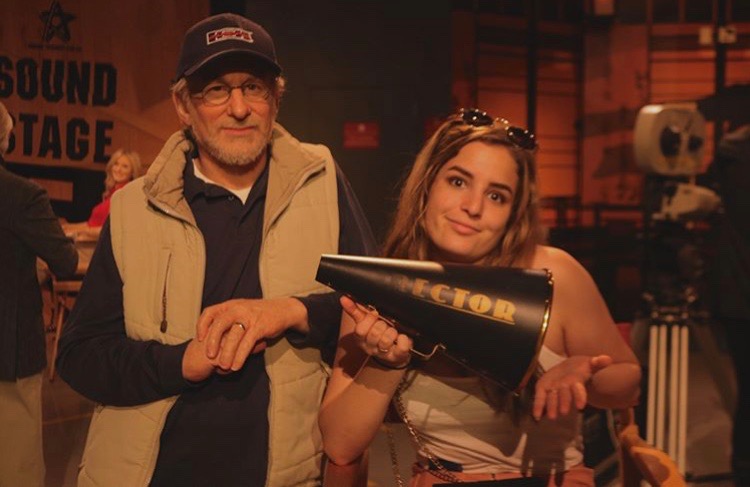 When it comes to my favorite shows and movies, I could honestly name a million. I love every type of genre and I would credit this to my early exposure to a wide range of films as a kid.

My father has a huge love for horror movies and starting from the age of 6, I would outlast both of my older brothers and my mother whenever my dad played one for the family. It ended up being just the two of us watching something like Splice until the very end (a movie that was permanently scarred into my 8-year-old mind).

My grandmother introduced me to crime TV shows and it became our ritual to sit down together to watch the weekly episode of Bones, a show that I still love (and rewatch) to this day.

My obnoxious older brothers introduced me to comedies like Dodgeball and shows like South Park at maybe too young of an age, but nevertheless helped me foster an appreciation for simply silly entertainment.

Lastly, my mother introduced me to dramatic shows like Gossip Girl and romantic comedies like 10 Things I Hate About You or Definitely, Maybe a genre that holds a special place in my heart to this day. Some of my favorite shows now are New Girl, Psych, Greys Anatomy, and Bones while my all time favorite movie is Eternal Sunshine of The Spotless Mind.

I wanted to complete my project at the Greater Cleveland Film Commission because while many of my classmates saw this project as an excuse to skip the last month at school, I saw it as an opportunity to get started as quickly as possible contributing to the industry I’ve always dreamed of working in. The GCFC is doing groundbreaking work helping to bring films to Cleveland and I couldn’t think of anything I would be more excited to be a part of. While I will be traveling out to LA to try and make my mark on Hollywood, I cannot wait to return home every year and see the progress the GCFC is making for the Land. Being able to spend my project here, I cannot wait to start learning the in’s and out’s of what it’s like working in film and am grateful to be able to begin my college career with some prior knowledge of the industry.

One day I hope to be a part of a show as beloved as Game of Thrones, working in the writer’s room, making an impact on thousands of watchers, and looking back to my roots feeling pretty lucky that I developed from being just a kid from Cleveland who loved to tell stories to the person I had always dreamed of being.

One of the core pillars of GCFC’s mission is workforce development. We work with local educators to help students who have a desire to enter a career in media production gain exposure to the industry. Throughout the year, several opportunities are available to students interested in the media production industry to come work with us and learn not only about the industry but also about non-profit organizations and day-to-day office life. We also host students for limited time shadowing and senior projects, which can last anywhere from one day to one week.