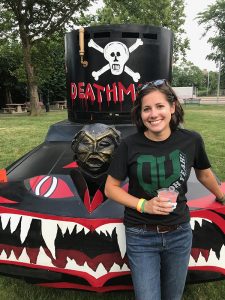 Originally from Hudson Ohio, I grew up fascinated with movies and TV shows. Every year on my birthday, I would ask for the two disc special edition DVD of that year’s big movie so I could watch all the behind the scenes extras on how the movie was made. The thought of a career in the movie making business seemed like a pipedream, I turned my attention towards another passion of mine, working with animals.

I graduated from Ohio University with my Bachelor of Science in Biological Sciences. I began my professional career working at a dog daycare in Columbus while volunteering at a wildlife center. Through that experience I learned that the animal profession was just not for me. However, wanting to explore other options in the science based fields, I moved on to work for the City of Columbus as a health inspector. The job was a perfect fit. Not only did I spend most of each day out of the office, inspecting local restaurants and bars, but I also interacted with new people on a daily basis. But Cleveland was always my home, and I knew I would someday return to it.

While planning our wedding, my then fiancé got the job offer he had been hoping for in Cleveland. We bought a home in Lakewood, Ohio, and were married soon after. Instead of returning to a health department, I chose to stay home and renovate our nearly 100 year old home. Skim coating and painting walls, restoring old hardware, stripping, sanding and re-staining doors as well as window trim and baseboards became my new career. In addition, we rescued our second dog, who has required lots of rehabilitation from prior abuse. Being involved in movies was the last thing I thought could happen. Until May 2018.

A movie started filming across the street from our house, and I volunteered our newly renovated back rooms as a basecamp for some of the actors and our garage as storage for some of the electrical equipment. I began speaking to the crew and actors as often as possible, and learned that there is a growing film industry here in Cleveland. On the movie’s final night of shooting, I was able to watch them film on set from 11:00 pm until they wrapped shooting at 7:30 am. It was then I realized that being in the movie making profession was not a pipedream, but totally possible.

Through this internship I hope to learn everything I can about how movies are made and eventually start a new career on movie sets here in the Land.