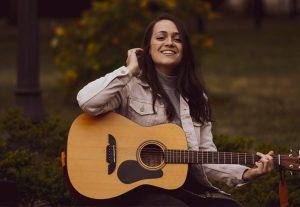 Hello! My name is Brielle Trussa, and I am a current senior Film Studies student at Baldwin Wallace University in Berea, OH. I live on campus during the school year, but originally am from Brunswick, OH. The idea of being able to intern at an organization focused on film and development, located so close to where I grew up and now attend school, is a dream! I feel so fortunate to be even a small part of the amazing work the GCFC is doing for film in Cleveland.

Following my graduation in May of 2020, I have plans to attend a graduate film program to further my education in the industry and gain new skills for my future career as a producer. I am especially interested in producing films/television shows that highlight underrepresented issues and voices, projects that are “socially conscious,” and helping to make productions more sustainable, as well as producing works created by women. My mom is a public high school art educator, which I have come to realize has greatly influenced my values and interest in social justice.

Apart from my studies in film, I am an avid reader and active musician, performing in various concerts at my school as a vocalist and guitarist. My largest responsibility on campus is the work I do as the Producer of PRISM, a student-led non-profit performance organization that encourages collaboration among the five art forms (music, visual art, theatre, film, and dance) while promoting inclusivity between our liberal arts and conservatory students. As Producer, I lead an executive board, consisting of twelve members, along with upwards of 100 students at a time for our three large events per year. PRISM’s final event is a showcase of performances that revolve around an issue of social importance; this year’s theme has to do with protest songs and being active in making positive change in our democracy (which is especially relevant with the upcoming presidential election!)

As a film studies student, I feel a certain responsibility to stay up to date with new films and shows, however, I find myself going back to my tried and true favorites from the past quite often, including Billy Elliot, Never Been Kissed, and Lady Bird. If you’re reading this, Greta Gerwig, call me! I am also a big fan of shows like The West Wing, New Girl, and The Good Place. Some of my favorite films and shows that have recently come out are Little Women, Knives Out, Parasite, Fleabag, and Unbelievable. Since music plays such a large role in my life, I think it’s important to highlight some of my favorites here as well, including Maggie Rogers, Brandi Carlile, Elton John, Sara Bareilles, and Lawrence.

I have wanted to intern at the GCFC since my freshman year of college, and now in my last semester at Baldwin Wallace, I finally get the opportunity to be a part of it! I am especially excited to gain more hands-on experience working in a production office, learning from the valuable expertise of the GCFC team, and learning new skills that will lend to my interest in the pre-production process. Simply being in this film environment directly helps to make me a better filmmaker and producer, as well as refining my skills being a part of a team! I’ve been looking forward to this experience for quite some time, and I can’t wait to get started!

If you’re ever interested in attending a PRISM event on BW’s campus, feel free to contact our organization on social media @bwuprism or me directly @brielletrussa for more information.