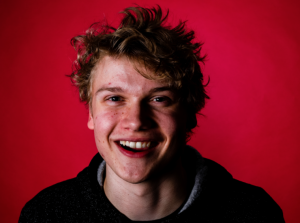 Hi, my name is Ben Kemper! I’ll be an intern at the Greater Cleveland Film Commission this summer (2019). This year, I’m a senior at Kent State University’s Digital Media Production program. I met the Commission’s Production Coordinator, Mike Wendt, a few years ago at the Cleveland International Film Festival. Through speaking with him, I got my opportunity here at the Commission.

I’m a film writer and director. I’ve been making movies since I was 10 years old, and I can’t see myself doing anything else for a living. Growing up, films like Raiders of the Lost Ark, and Star Wars sparked my love of movies. I love (in recent years) movies like First Reformed, The Lobster, and Good Time. Movies have been a huge part of my life ever since I can remember. A select few have pushed me to think about film in different ways than I had before. The prime example of boundary-pushing cinema that comes to mind for me is the movie Se7en. The last 20 minutes of that film taught me more about directing, motivated-camerawork, and visual storytelling than any class, video tutorial, or lecture ever has. The power of film is conveying what can’t (or shouldn’t) be said using only words, and that’s what draws me to filmmaking.

My primary motivation for wanting to intern at the Greater Cleveland Film Commission is that it really is the place for film in Cleveland. Being in Ohio, there isn’t a city that you’d consider a hub of film production the way L.A. or New York might be. However, I believe the GCFC is changing that by putting Cleveland on the map as a viable option for large productions to come to Ohio. It’s a lighthouse for someone like me trying to navigate the sometimes choppy waters of the film industry.

For my internship, I’m most looking forward to taking a peek behind the curtain of how organizations like the GCFC are run, and how they help make the movies that we all love. From here, I plan to continue writing and directing shorts and hopefully features soon.

Ben wrote and directed Pop! as a sophomore at Kent State. Pop! features a gay main character, a thirteen-year-old boy named Ty, as he faces obstacles like a bully and an alcoholic father.

Read more about Pop! on OhioFusion.com