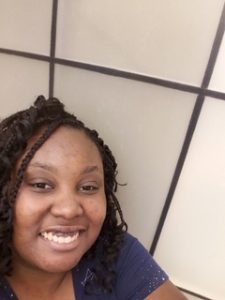 I’m Alana Pardόn, a recent graduate of Cleveland State University. I have always loved art and culture like drawing as a kid, playing and marching in the school band, and going out for the theater at Lorain High and Lorain County Community College. I love playing games like Overwatch, Don’t Starve and Stardew Valley, and I  also love watching television and movies; they inspire me to always grow and to always learn. To this day, I still love watching (binging, let’s be honest) shows and films that you can see the love and care poured into it; especially, when I can see myself in the main characters in one way or another.

I got sucked into Steven Universe, which is a gentle, curious and absolutely stunning animated show about love and music. I also enjoy Netflix’s Hilda that’s adorable in every way (don’t get me started on the color palette) and Brooklyn Nine-Nine, a comedy with a diverse cast that shows there are good cops in the world and not everything is in black and white. I thought Spider-Man: Into the Spider-Verse was amazing and the aesthetics gave me goosebumps. I never wanted to be Spider-Man more in my life than after I left the theater.

I think Parks and Recreation is better than The Office because I like Leslie Knope more than Michael Scott; I’m sorry (not really), but I would rather get stuck in an elevator with her and talk about breakfast food. Hereditary freaked me out in a good way and Boyz n the Hood is a classic. Furious Styles (Laurence Fishburne’s character) reminds me of my dad and the end shakes me, every time. Highly recommend it.

Static Shock and the Classic Powerpuff Girls were some of my favorite shows growing up, not only because I just have soft spot for black and/or female superheroes, but because of their genuine sweet and caring nature that showed the realities of life to me.  I have to admit, it is nice to see a part of me save the world. It’s why I was excited to hear that Wonder Woman, Black Panther, and Captain Marvelwere getting their own movies. It’s why I try to have everyone see The Breadwinner on Netflix. It’s why I get excited when I hear that Kathryn Bigelow and Jordan Peele were not only was nominated, but won in categories that no one like them has ever won before.

I still watch shows that looks like and act nothing like me, too. I like Youeven though I found the main character to be creepy and obsessive, but I was rooting for him the entire season. I like Monk, even though I’m relatively normal with a relatively normal and non-traumatic past, but I guess I partly like it because I like to guess who the murderer is.

This is also why I like Cleveland; it’s familiar yet new to me. It’s obvious from the above that I didn’t grow up in Cleveland, but one of the cities that’s (kinda) close by. Honestly, I’m kinda envious of Cleveland. We don’t have Public Transportation like RTA and we don’t have nearly as many things to do; my favorite part is University Circle.  I have had to go to the Cleveland Museum of Art because of a class, but it’s beautiful there and I love taking my friends and family there whenever I can. I have friends recommend me food places all the time there, too, though we usually never have a chance to go there.

I am excited to be an Intern at the Greater Cleveland Film Commission. I met Ivan Schwarz when he was the guest speaker in my Film and Business class in December. I remember him saying that he wanted more interns from Cleveland State, considering that the Film School officially opened up in August of last year. After class, we talked for a bit and he gave me his card that I still carry around with me to this day and I emailed him the next day saying that I would like to be an intern.

I was fully prepared to email him weekly until I got a response, but it only took one. Now, I can get my foot in the door here at home instead of leaving for Los Angeles where interns are a dime a dozen. Here, I can get hands-on experience and feel out what I like doing, like reading and breaking down scripts and researching. I went on so much about what movies and shows I like in hopes that that would give you a better idea about who I am rather than going on and on about traits I relate myself to.

Hopefully, my little story about Mr. Schwarz tells you how determined I can be. I hope it worked and hope to see you in the movies!