Ever since I was 8 years old, I always wanted to be an actress. I use to practice mini scenes in my room when no one was around. I pictured myself acting in Syfy & action films. I also pictured myself being on set working on films behind the scenes. I’ve done theatre apprenticeships, acting classes, and acting in plays just to get better at my craft. My goal is to be a film actress instead of theatre actress just because I have stage freight and I feel better in front of a camera rather than on stage. I get really shy when I have a crowd of people eyes stuck on me. Which is why being in front of a camera is the best option. 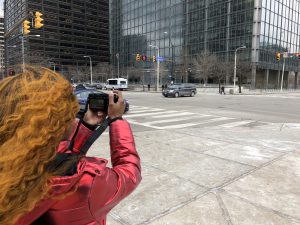 College is an option after high school and my career goal is Film Acting and Field Producing. I would love to attend HBCU. My main two colleges I’m looking at are Howard University and Florida A&M University. These two schools have  great film programs and I feel as if they will take me to where I would like to be in life.

My interest in producing comes from watching behind the scenes footage of movies and TV shows. I want to be a hands-on producer and I feel field producing fits that position. A family friend referred me to The Greater Cleveland Film Commission because she noticed how passionate I was about film. I wanted to attend the film commission for my senior project because I felt they could give me the experience I needed to get more into producing.

I get a lot of family members that tell me that I won’t go far in film and they feel it’s a waste of time and I should be a doctor, but my mom has always been on my side to keep my confidence up so I can keep my eyes on the prize. I would never give up on acting and producing. I feel once your heart is set on something you should go for it and let nothing get in the way.

I’m happy to say Ashley Alexandersen made my dream come true and got me closer to my goal. The Greater Cleveland Film Commission is the number one place to go to for all movies filmed here in Cleveland and Northeast Ohio. They’re a high nonprofit organization that gives back to their city through various events and internship hosting, which I really appreciate. Some of my favorite movies were made here in Cleveland like “Avengers”, “My Friend Dahmer”, and a popular Netflix movie “Little Evil”. I am thankful to be a part of an organization like the Greater Cleveland Film Commission and I feel my experience here will set me far in life.

One of the core pillars of GCFC’s mission is workforce development. We work with local educators to help students who have a desire to enter a career in media production gain exposure to the industry. Throughout the year, several opportunities are available to students interested in the media production industry to come work with us and learn not only about the industry, but also about non-profit organizations and day to day office life. We also host students for limited time shadowing and senior projects, which can last anywhere from one day to one week. Rahnissa Ware is a senior project intern from Maple Heights High School.