I am currently a senior at Magnificat High School and for graduation, all the seniors take part in a career shadow project called Genesis. We find a career that we are interested in and shadow that job for a total of 42 hours. When I heard about the Greater Cleveland Film Commission I knew that had to be the place I completed my project. 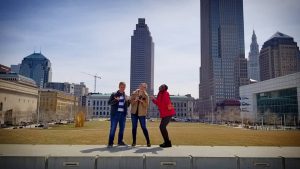 During my time at the Film Commission, I have learned how big of an impact this place has on the film industry in Cleveland. GCFC helps scout locations for productions interested in filming here, finding the best and most unique place in Cleveland to film. They also have crew and vendor lists compiled so productions can support local jobs while in Ohio. GCFC has brought so much to the city of Cleveland and I am so glad I could be a part of that for a week!

Next year, I will be attending Cleveland State University and will be in the school of Film and Digital Media. I am so excited to be attending Cleveland State the same year the program is starting up. There is so much happening with film right now in Cleveland and studying it in the same city, getting hands on experience, is something that is really special. With the help and support of the Film Commission, I can study film in the city that I love.

One of the core pillars of GCFC’s mission is workforce development. We work with local educators to help students who have a desire to enter a career in media production gain exposure to the industry. Throughout the year, several opportunities are available to students interested in the media production industry to come work with us and learn not only about the industry, but also about non-profit organizations and day to day office life. We also host students for limited time shadowing and senior projects, which can last anywhere from one day to one week.