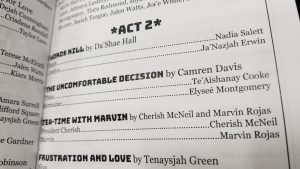 Saint Martin de Porres High School held its annual Arts Festival on Friday April 27th, and our very own GCFC intern Camren Davis was featured in the night’s lineup of 10 minute student-written and directed plays shown that evening.  Among the 10 plays featured, Camren had a hand in two of the plays chosen; the play he wrote is titled “The Shattered Truth About You” and the one he directed is titled “The Uncomfortable Decision”.  Across the board, each play showcased a deep social commentary regarding topics such as cheating, domestic abuse and race in such a way that one would almost think they are watching plays written by August Wilson.  Standing out among the choices was Camren, whose storyline in both his plays tackled the difficult topic of abortion and sexual assault.

In the short play Camren wrote, “The Shattered Truth About You”, a young woman confides in her best friend about the relationship she is having with the man that she had her “first time” with, only that her “first time” wasn’t on her own terms.  She states that the only reason she has stayed in the relationship is to justify the unwanted physical relationship that started everything off; if that isn’t enough she reveals that she is now pregnant with his child. Her best friend comforts her, telling her that she will be okay on her own. The friend reveals that the same thing happened to her, and she ended up getting an abortion, which the young woman had helped her through, so she would do the same for her.  Now enter the boyfriend; large and in overalls, his arrival is when the drama starts. The reveal of his girlfriend wanting to break up the relationship leads to the reveal of the baby, and his want for her to get an abortion. She is appalled by his nonchalant demand for it, and when asked why, he states that “he’s done it before”.  All eyes turn to the best friend.  She reveals a year-long relationship that had been going on between her and her best friend’s boyfriend, which also resulted in a pregnancy, and led to her abortion.  A hush fell over the crowd as a knife is pulled, and the young woman threatens to kill both herself and the baby, only to be stopped by those around her when…..the curtain drops.

Following the exhilarating drama, came Camren’s second play, the one he directed, “The Uncomfortable Decision”.  In this short play, a young woman finds herself pregnant. After telling her boyfriend the news, she finds out that he would rather she get an abortion and move on with her life. He tries to bribe her with money, then threatens to leave her behind to raise the child on her own if she won’t get rid of it.  The boyfriend reveals that if the child were to be born,  it will have 7 brother and sisters already; he’s done this too many times before.  After threatening her one last time, she tells him that she is keeping the child, and doesn’t want any help from him.  Before leaving, she asks him why he is the way that he is, and his response is simply, “ this is who I am and what I do”. She is undeterred; this may look like a bad situation right now, but she will be able to get through it, raising her child on her own.  She’s optimistic that her child will become great, and she ends up thanked him for being the way he is, but not because what he was doing was right.  She will make sure that her child is a better person that its father would have ever been.

Camren was excited to talk about his experience both directing and writing. “My experience directing this play was very fun!  I was skeptical about since most directors are very loud and vocal, two traits that I lack.  But in the end, I made it work. My actors helped make my job easier by pitching ideas to one another and opening my eyes to new ideas.  For the play that I wrote, I think it was given to good hands.  Every detail, every line and scene came out spectacular; it was like watching a movie. Overall this experience was great, and if I were given an opportunity to do it again, I would definitely go for it.”

Camren is graduating from Saint Martin de Porres in June and will be attending Youngstown State University in the fall.He goes on to say that “maybe in college next year I’ll be given this chance again, hopefully on a bigger scale.” We look forward to what Camren will do in the coming years and wish him well with his transition to college!