Jereme Gelske is one of our Spring 2018 interns from Kent State University. This is his take on the cultural phenomenon that is the “Black Panther” movie, and the reactions of the Cleveland crowd at our exclusive fundraiser screening. 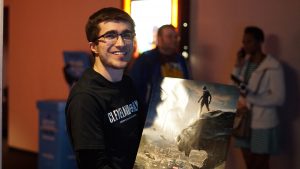 It’s no secret that Black Panther was one of 2018’s most highly anticipated films, but what many didn’t anticipate was how incredibly successful the film is already turning out to be.

Sitting at a kingly 97% on Rotten Tomatoes, Black Panther is the highest rated Marvel film of all-time, beating out both Iron Man and Logan. According to Fandango, Black Panther’s pre-ticket sales have been consistently out-pacing every other superhero film ever made, including Batman v Superman and Captain America: Civil War.

At this rate, Black Panther easily has the potential to surpass Deadpool as the highest grossing February movie release. This weekend’s box office report will give us the exact numbers regarding ticket sales, but it’s safe to say that the King of Wakanda can hold his own against the ever-growing world of superhero films. So aside from shattering records, what makes this movie so special?

Ever since his first appearance in Fantastic Four #52 in 1966 (and kicking all four of their butts in that issue nonetheless), King T’challa has proven to be a major character in the world of comics. Created by Stan Lee and Jack Kirby during a time of extreme racial controversy in the United States, T’Challa stood as a symbol of strength and heroism for countless African Americans. The film is able to convey that same message to modern audiences, also in a time where equality isn’t where it should be.

The character of T’challa was the first major black superhero to hit comics and the first one to lead a feature film of this scale. Sure, the Wesley Snipes Blade trilogy, Catwoman and Steel (yeah, the one with Shaquille O’Neal) already exist, but it’s fair to say that these didn’t do much to even out the film-making landscape. Much like Wonder Woman did for women, this film proves that diversity is a truly fantastic thing and should be embraced not only by movie studios, but by the world. Black Panther’s success is the first step on a long road of diverse leading roles in the film industry. With Captain Marvel (led by Brie Larson) on the way, and almost certainly a Black Panther sequel down the road, the future is bright for comic book fans!

In celebration of Black Panther’s release, the Greater Cleveland Film Commission hosted a special early screening of the film on February 15th, and the audience was ecstatic. Fans of all backgrounds attended this showing with popcorn in their hands and perma-smiles on their faces. Fans who attended received custom t-shirts, posters and entries into a raffle for an epic action figure and a full set of Funko Pops.

As soon as the end credits began to roll, the theatre erupted with a round of applause. WKYC covered the event and even got to speak with some of the fans. Check out their coverage HERE.

This film was so incredible because its messages were for all types of audiences. No matter what kind of person you are, no matter what you look like, there is a message in this story for everyone. It balances political awareness with superhero epicness in a way that no other superhero film has done. Celebrities, independent organizations and fans are all banding together to purchase tickets for low-income families to see this film. If that doesn’t convince you to head out and see this movie, then I don’t know what will…… 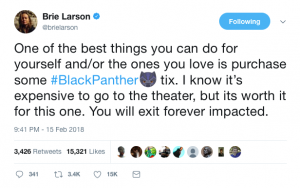