Gina Vernaci, President & COO of Playhouse Square, sees great synergy between the film and theater industries, “First and foremost, we are both telling stories. But beyond that, the skills needed overlap. Both industries must have actors, of course, but also carpenters, electricians, make-up artists, hair and wig stylists, plus costume, lighting, set and sound designers.” 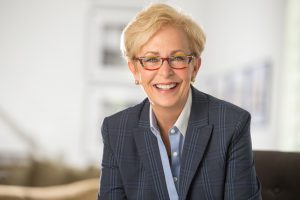 Gina believes Ohio is more than ready to take its place as a premier location for film and theater production, with a wealth of resources, locations and skilled labor.

“All we are missing is the expansion of the Ohio Motion Picture Tax Credit,” she says of a bill currently being considered in the state legislature. “Although theater and film already are important drivers of our economy, the passage of this tax credit will have a noticeable, positive impact on spending and job creation that we need in Ohio.”

Like the Greater Cleveland Film Commission, Playhouse Square focuses on economic development and actively advocates for production to take place in Ohio. In her role at Playhouse Square and as the Road Vice Chair of the Broadway League, Gina regularly meets with leading theatrical producers, “They all love Ohio, but the lack of a tax credit makes other locations more attractive for pre-Broadway production and rehearsals.”

As partners, GCFC and Playhouse Square have the privilege of sharing what those of us who live already know: Ohio and its talented, hard-working people deserve to be in the spotlight.

“We are proud to partner with the GCFC to build a business sector and supportive working environment for those who make film and theater,” says Gina, “We know it is time for Ohio to take its place in the spotlight.”

Learn more about Playhouse Square by visiting their website.