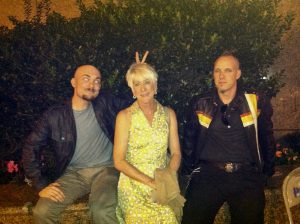 Carol taking a break as a German Pedestrian extra with her fellow extras and “sons” Matt and Fourney.

It’s fitting that long-time supporter turned GCFC Member, and retired local crew member, Carol Maple Oppenheim is featured in this month’s spotlight; she first got her start in the Cleveland film scene in August 2011 when she was cast as a German pedestrian extra in The Avengers!

“Before The Avengers, working in the film business had never crossed my mind,” Carol says, “but I found the entire process exciting and fascinating — the complexity, the teamwork and coordination among the myriad of departments, the logistics, the energy. And of course, there’s no more exciting place to begin than on the set of a Marvel film!”

After her first week of filming, Carol was hooked, “I thought, ‘I’ve got to find a way to do more of this – but next time I want to be on the crew!'”

Like many people interested in a career in the film industry, Carol wasn’t sure how to get started.  The first thing she did was sign up for the eNewsletters from the Greater Cleveland Film Commission.

“I started attending the [Media] Mixers that fall, and heard Ivan speak at one of the libraries.”  GCFC President Ivan Schwarz was giving a talk about how members of the public could get their start working in the Cleveland film industry.

In his talk, Ivan mentioned an upcoming workshop called the Production Assistant Training Seminar, which Carol attended with her then high-school aged son. The seminar turned out to be an invaluable resource for both of them in learning film set protocol and etiquette, as well as the skills and attitudes needed to land their first film jobs.  Carol’s son actually went on to major in film in college and is now living in Los Angeles and working at a post-production house.

“That seminar really got me started,” Carol says. 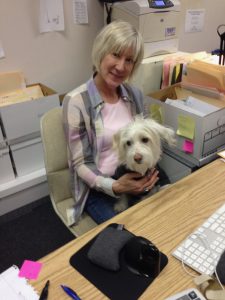 Over the next several years, Carol worked as a Set Production Assistant on the 2012 Rock & Roll Hall of Fame Induction Ceremony, and despite no prior accounting experience, found her niche unexpectedly in the accounting department for the film The Kings of Summer.  She went on to be an accounting clerk for Captain America – The Winter Soldier, then moved up to accounting assistant for Jenny’s Wedding, With This Ring, and Survivor’s Remorse.

For Carol, the film industry is “one of the few remaining industries where if you have a strong work ethic, you can really ‘learn on on the job’. I am a prime example.”

Carol appreciates that the film industry provides opportunities to people across the broad spectrum of skills, education and abilities, many of which do not require a college degree. Without prior film or accounting experience, her willingness to learn on the job and attend workshops, in addition to some self-study, helped her move up from a Production Assistant into the accounting department.

“I love how that broad range of people all work together, interact and pull together to create something.”

When it was time for her to move on from working in the Cleveland film scene, Carol transitioned from crew member to ardent GCFC supporter, and then to GCFC Member!

“I continue to support the GCFC for many reasons – gratitude for the opportunities it gave me and respect for the incredibly hard-working Cleveland film crew community I grew to know and love – but mostly because I believe in its mission: that growing an ever-stronger media production industry is vital for creating jobs and economic impact here in Greater Cleveland.”

Support the GCFC and film in Cleveland by becoming a member like Carol. Click HERE for membership information.