Today, I would like to inform you about our transitioning leadership. Effective July 31, 2019, longtime president Ivan Schwarz will be leaving the GCFC to focus on his work with LIKE Entertainment, a new production company co-created with his wife Katia. He will be succeeded by industry veteran Evan Miller, who is returning to his hometown of Cleveland after 15 years working in entertainment in Los Angeles as a film and television talent agent. 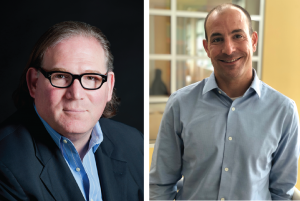 Ivan has been an incredible leader for the GCFC since 2006, and we cannot thank him enough for his stewardship in fostering a robust film and television industry here in Ohio. Among his many accomplishments include leading the statewide effort to develop the Ohio Motion Picture Tax Credit, which has created 5,000 full-time equivalent jobs in Ohio and generated nearly $700 million in economic impact to date. He also was instrumental in working with state leaders to expand the incentive to include theatrical productions, allowing Ohio to compete for even more jobs, as well as the creation of Ohio’s first-ever standalone School of Film, Television and Interactive Media at Cleveland State University, which will play a key role in attracting and retaining talent to our state to support the film and television industry.

Though we will miss Ivan, we look forward to welcoming Evan to the team, and we have full confidence that he will build upon the GCFC’s success and help shepherd the industry into a new era of growth and development here in Cleveland.

Evan comes to the GCFC from Abrams Artists Agency, where he served as a feature film and television talent agent, representing a wide array of clients in film, television and theater. In his role, he worked collaboratively with clients, writers and producers to foster projects from script to screen, as well as established relationships with feature and television development executives – skillsets and connections that he will leverage in his new position. Prior to Abrams Artists, he served as an agent at the Bauman, Redanty & Shaul Talent Agency. Miller grew up in Cleveland, and he is a graduate of The Ohio State University with a Bachelor of Science in Business Administration and Marketing. He is a passionate believer in Cleveland’s potential to become a leading destination for film, television and theater production and is committed to continuing to focus the GCFC’s efforts on expanding the tax credit to $100 million.

Please join me in wishing Ivan success in his work with his new company and welcoming Evan to the GCFC team.

Hear GCFC President Ivan Schwarz’s thoughts about his decision to leave the film commission in WKYC’s Let’s Be Clear Segment.