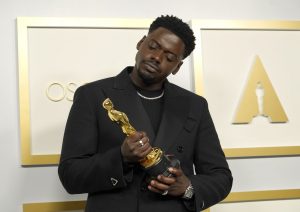 Daniel Kaluuya, winner of the award for best actor in a supporting role for “Judas and the Black Messiah,” poses in the press room at the Oscars on Sunday, April 25, 2021, at Union Station in Los Angeles. (AP Photo/Chris Pizzello, Pool)

CLEVELAND, Ohio — Many popular movies have been shot in Cleveland over the years, from “A Christmas Story” to “Marvel’s The Avengers.” But outside of “The Deer Hunter,” the city’s film industry hasn’t produced many Academy Awards.

But that changed Sunday when “Judas and the Black Messiah” took two home Oscars. Daniel Kaluuya won Best Supporting Actor and H.E.R. won Best Original Song for “Fight for You.”