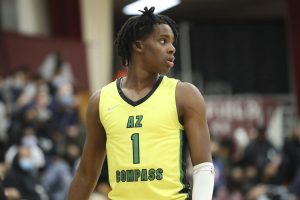 CLEVELAND, Ohio — “Shooting Stars,” the LeBron James biopic currently filming in Cleveland and Akron, has found its star. Marquis “Mookie” Cook, a high school basketball phenom at Arizona Compass Prep in suburban Phoenix and a University of Oregon recruit, will play a young James in the story focusing on the NBA superstar’s formative years growing up in the inner city of Akron. The news was first reported by the Hollywood Reporter.