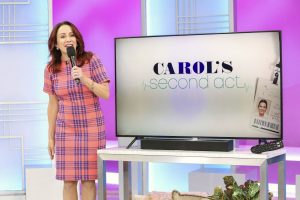 Patricia Heaton made a guest appearance on the CBS game show “The Price Is Right” on January 8, 2020.

Here’s your chance to talk to Emmy-winning actress Patricia Heaton.

The Bay Village native will be the featured guest on the second episode of the Greater Cleveland Film Commission’s “Between the Screens” show. The live online conversation, hosted by Q104 FM personality Jeremiah Widmer, will take place 7 p.m. Monday, June 22.

The program is free to stream, but attendance is limited. Registration is required at clevelandfilm.com.

Heaton was the star of “Carol’s Second Act,” a sitcom recently canceled after one season on CBS. But she is best known for her roles in “Everybody Loves Raymond” and “The Middle.” Heaton also is a best-selling author and currently working on a book called “Your Second Act.”

Heaton, of course, comes from a famous Cleveland family. Her late father Chuck was a longtime sportswriter for The Plain Dealer, and her brother Michael served as the newspaper’s “Minister of Culture.”