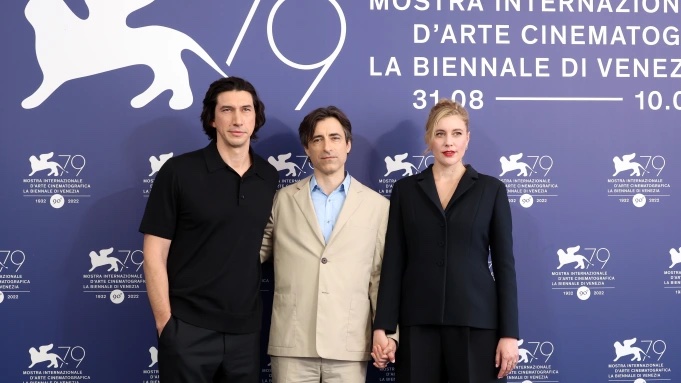 Noah Baumbach passed through the Lido Wednesday afternoon where he broke down the origins of his Venice Film Festival opener White Noise, starring Adam Driver, Greta Gerwig, and Don Cheadle.

Written for the screen and produced by Baumbach, David Heyman, and Uri Singer, the film is based on the cult book by Don DeLillo, which Baumbach said he rediscovered during the height of the COVID-19 pandemic.

“I both couldn’t believe how relevant it felt and how it felt so much about the moment,” Baumbach said. “But I was also struck by how I feel like whatever moment was going on it would feel relevant to that. And at the same time, I started not only taking on DeLillo’s language but finding my own voice within his language. It was something that felt very familiar.”

Production on the film took place in Ohio, which Baumbach said provided a much-needed respite from his native New York City, which has been a constant backdrop in his past work.

“In New York, everyone is so bored and jaded and annoyed that you’re on their street. And you’re running into the TV show Blue Bloods on the next corner” he joked. “The novel takes place in a fictional college and a fictional town in a fictional city, which created options. But I had a sense. It felt like somewhere in the mid-west.”

Speaking of Ohio, he added: “It’s a very distinct place and it was a great place to shoot because they’re not as used to having movies there so many of the people in the background, in the college, those are real kids and they’re parents that live there. They aren’t actors. And the people at the barracks, many of them aren’t actors they’re just people who wanted to be in the movie. It was the best experience I’ve had with bringing a community into a movie.”

DeLillo’s novel is best known for its large-scale, genre-bending narrative and pop-philosophical ideas on unbounded consumerism and ecological catastrophe. Rumors online and on the ground in Venice have suggested that the budget for Baumbach’s adaptation clocked in north of $100 million. Discussing the scale and style of the film, Baumbach said he spent a lot of time during production thinking about the theatrical film language of the 1980s.

“People have already said to me I haven’t seen you do this before but the material hasn’t called for it. And this material really did,” he said. “The story is a story of American culture in a sense. And being surrounded by American culture. I was a child in the 80s. And it was a very informative time for me. The movies I saw were part of what informed me and led me to do what I do, so I also saw it as a story of American cinema because of the genre elements and the tonal shifts that were available to me.”
The film also marks Greta Gerwig’s long-awaited return to acting since she picked up the camera for her much-lauded directorial efforts Lady Bird and Little Women. Gerwig, who is in a relationship and shares a child with Baumbach, said she began re-reading the book at the same time as the director and was inspired by the novel’s theatricality.

“There was something about it that made you want to share it with people because it seemed to be both emotional and intellectually exciting,” she said. “We were lucky to have a long stretch of rehearsal before shooting and that’s when the characters became real people. Because in the world of the novel they felt more abstracted. That’s when they felt more like characters in a Baumbach movie.”

White Noise also marks the first time a Netflix movie has opened the Venice Film Festival as well as Baumbach’s return to the Lido after he premiered Marriage Story at the festival in 2019.

Netflix will give White Noise a theatrical release starting November 25 before it streams on December 30.