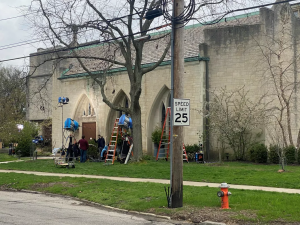 CLEVELAND HEIGHTS — Production on the LeBron James movie, “Shooting Stars,” has begun in Cleveland and will continue for another two months.

Tuesday, crews took exteriors in Cleveland Heights at St. Paul’s Episcopal Church on Fairmount and Cedar, blocking off roads in the area, but according to Bill Garvey, President of the Greater Cleveland Film Commission, it’s a small inconvenience considering the benefit.

“We’re happy to have LeBron back in town,” Garvey said. “Obviously, he’s a big supporter of what we do and he’s been here before with other project he’s made in Northeast Ohio.”

The movie is set in 2003 and based on the LeBron and Buzz Bissinger book of the same name, chronicling the St. Vincent/St. Mary state championship basketball run while LeBron played in high school. Garvey says he doesn’t know if Bronny, LeBron’s son, will play the NBA superstar as a teenager.

“It’s LeBron’s formative years so there’s an actor playing LeBron and his teammates and they’re current basketball players in the AAU circuit,” Garvey would only say.

LeBron’s Spring Hill production company will produce the movie and will bring $25 million dollars into the region. The movie will be shot entirely in Cleveland and Akron.