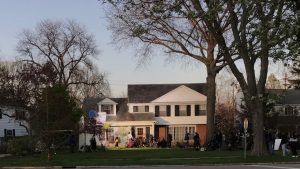 A production crew films a scene for “Shooting Stars” in Shaker Heights on Monday, May 2. [Carrie Wise / Ideastream Public Media]

Just before sunset Monday evening, crew members filmed a movie scene from the front steps of a Shaker Heights home.

This was one of several shoots in the Shaker area this week for the LeBron James’ biopic “Shooting Stars.” Filming in Akron, Cleveland and other locations around the region will continue until the beginning of June, according to Bill Garvey, president of the Greater Cleveland Film Commission.

“It’s a good, high quality, positive story,” Garvey said. “Stories like that, it’s important to tell them, especially local stories and stories as impressive and as inspiring as LeBron’s story.”

Garvey’s organization helps film projects like this one set up production in Ohio. The commission also lobbies for government support to bring filming to the region. The state approved $7.6 million for this production as part of Ohio’s Motion Picture Tax Credit program, which awards up to $40 million annually.

Garvey is pushing for lawmakers to remove the cap on the incentives in order to lure more business to the state.

“I think the demand for content is greater than ever, and because of that, there’s more production dollars flying around searching for a landing spot,” he said.

Other states are hoping to attract more production business too. For instance, Pennsylvania’s film industry is lobbying lawmakers to allocate $125 million for tax credits. In Michigan, advocates seek to bring back film incentives that were previously scrapped. By comparison, California and New York allocate hundreds of millions in production credits annually.

“Shooting Stars” is set to premiere on the Peacock streaming platform in 2023.