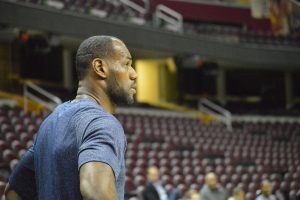 Film crews have once again descended on Cleveland – this time to film the LeBron James movie, “Shooting Stars.”

Set in 2003 and based on the 2009 James and Buzz Bissinger book of the same name, the movie chronicles the St. Vincent-St. Mary High School state championship basketball run while James was in high school, alongside his best friends, Dru Joyce III, Sian Cotton, Willie McGee and Romeo Travis. The five friends were dubbed “the Fab Five” during their time playing for the Akron school.

James’ SpringHill production company is producing the movie, bringing $25 million to the region, according to multiple reports. The project is being shot entirely in the Cleveland and Akron areas, with filming beginning in Beachwood on April 18. Other filming locations included the old South High School gym in Cleveland’s Slavic Village neighborhood and St. Paul’s Episcopal Church in Cleveland Heights. Future production dates include May 4 through May 6 and June 2, according to a casting notice posted by the Greater Cleveland Film Commission. General filming is slated through the end of June.