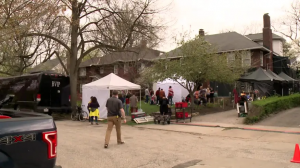 CLEVELAND HEIGHTS, Ohio (WJW) — The lights, the cameras and all the action came to quiet Woodmere Drive in Cleveland Heights Monday.

“It’s been really exciting and a lot of fun to watch,” said neighbor Muffy Kaesberg.

The major motion picture being shot at a century home on the street is “Shooting Stars,” a biopic about Akron-born basketball legend LeBron James and his high school run with the Fab 5 to the championship in 2003.

Mikki McCubbin owns the home that was tented to make it look like nighttime.

She is no stranger to the movie industry.

“I’m originally from Los Angeles, I used to work in special effects makeup so I have been around this a lot, it’s kind of like, it’s cool, it’s very cool though for this area and I love that they’re utilizing Cleveland,” she said.

Universal Studios also used the old South High gym, which according to a tweet from Slavic Village development was transformed into St. Vincent-St. Mary High School. Filming is also happening in the Akron and Canton areas.

“In my opinion, this is the best region to make movies. It’s a Shangri-La for moviemakers,” said Greater Cleveland Film Commission President Bill Garvey.

He says the film will bring in an estimated $25.5 million dollars to the local economy.

“It spotlights the industry that we’re building in Northeast Ohio and bringing jobs and economic investment into our region,” he said.

We spotted actors like Caleb McLaughlin and Khalil Everage from Netflix’s “Stranger Things” and “Cobra Kai” respectively, on set.

“Our street seems to be famous. A few years ago Katie Holmes filmed a movie on the next block down,” said Kaesberg.

The residents we spoke to are excited to be part of the Hollywood story on the four-time NBA champion.

“I think LeBron James is just such a role model for so many people and especially young black boys so we are just so happy to see his story brought to the big screen,” said Evans.