The Industry-Wide Labor-Management Safety Committee Task Force (the “Task Force”) respectfully submits the following guidelines for consideration and adoption for the resumption of motion picture, television, and streaming productions in an environment that minimizes the risk of contracting or spreading COVID-19. These recommendations set forth the consensus of the Task Force and outline guidance regarding protective measures to be used, including regular screening, diagnostic testing, use of personal protective equipment, cleaning and disinfecting work sites, and appropriate response should an employee contract COVID-19 or be exposed to it.

The proposed recommendations were developed by the Task Force at the request of and in collaboration with the various unions of the motion picture and television industry and the Alliance of Motion Picture and Television Producers, which collectively exercised final control over their content, based on the input provided. The Task Force consists of the International Alliance of Theatrical Stage Employees (IATSE) and its West Coast Studio Local Unions, as well as its New York Local Unions, the International Brotherhood of Teamsters as well as the Basic Crafts Unions, the Screen Actors Guild-American Federation of Television and Radio Artists, the Directors Guild of America as well as the Alliance of Motion Picture and Television Producers and other representatives of the producers. The guidelines are based on discussions with health experts, guidelines issued by U.S. Centers for Disease Control and Prevention (CDC) and the Occupational Safety and Health Administration (OSHA), and input from industry participants familiar with the working conditions of motion picture and television production. The participants in the Task Force are listed in the Appendix.

While these guidelines and protocols address many elements of production, productions must consult applicable state and local public health orders as well as applicable federal and state OSHA guidelines. These recommendations are intended to address the circumstances under which production can safely resume. The Task Force recognizes that COVID-19 is a new disease and many of the facts surrounding COVID-19 are still being determined. Several elements of the protocols including testing and PPE are subject to further discussion and agreement between the Employers and the Unions and Guilds representing the cast and crew. As circumstances change, and public health officials issue new guidance, the protocols under which production occurs may be adjusted accordingly. 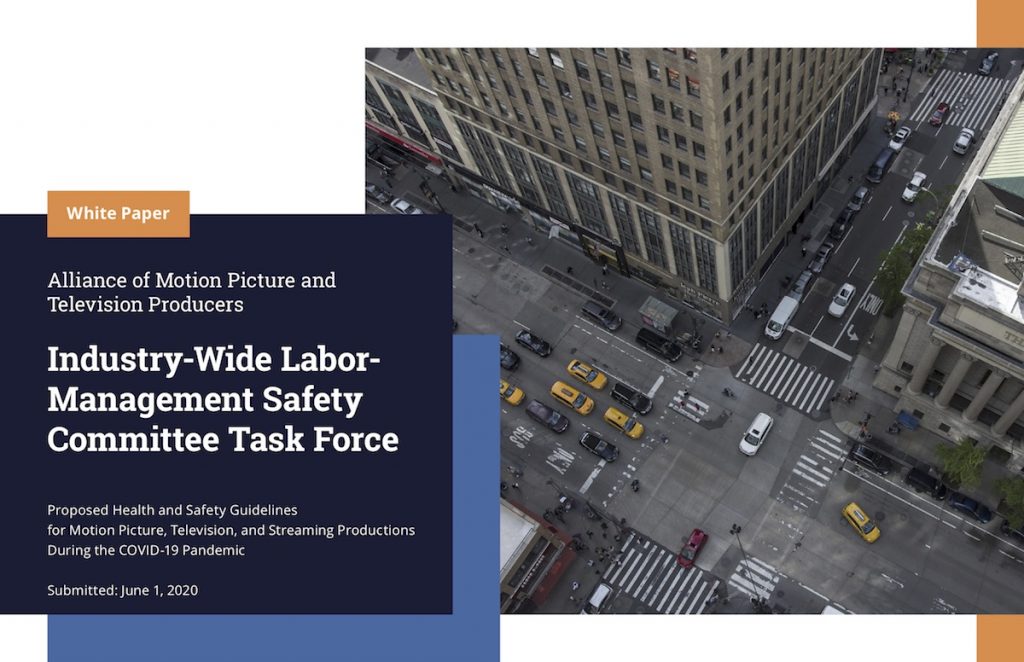