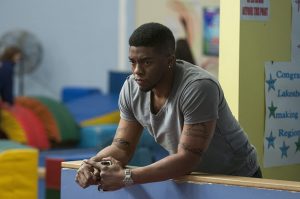 News broke Friday night of the death of Chadwick Boseman at the age of 43. Boseman has been battling colon cancer since 2016, a diagnosis he kept out of the public eye. He died at home with his wife and relatives by his side, according to a statement posted on his Twitter account.

Boseman was best known for playing superhero Black Panther in the Marvel Cinematic Universe. He earned critical acclaim throughout his career for playing African American icons like Jackie Robinson (“42”), James Brown (“Get On Up”) and Thurgood Marshall (“Marshall”).

Boseman also played the fictional Vontae Mack in the 2014 film “Draft Day” focused on the Cleveland Browns. In the movie, Mack is a top prospect from Ohio State. Fictional Browns general manager Sonny Weaver Jr. (played by Kevin Costner) shocks the rest of the league by trading up and selecting Mack at No. 1 overall.