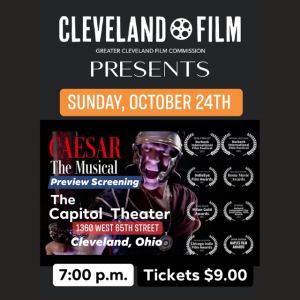 The Greater Cleveland Film Commission (GCFC) was honored to present Caesar The Musical, the story of the assassination of Julius Caesar…told in concert.

It took writer and composer, Mike Petrone, ten years to write the stage play, COVID-19 led to a radio broadcast in New York City, which led him to creating the new movie during the lockdown and live theater shutdown.

Check back soon for event pictures!

Read the most recent Cleveland Jewish News article on the film’s creation here. 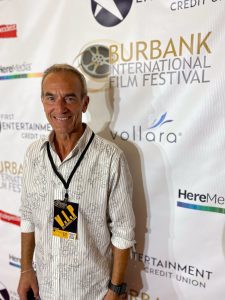 Mike Petrone is an award-winning composer and filmmaker best known as the author, director, and composer of the feature film Caesar The Musical (2021). His previous composer film credits include: Christmas at Maxwell’s (2006), Hard Pill (2005), War Story (2001), and Flattered (1995). Additionally, as an actor, he has appeared in 24 Frames Per Second (1993), Christmas at Maxwell’s, and Caesar The Musical.

Mr. Petrone is also a well-known piano man and entertainer, owing to his 28 years and 5,800 performances at Johnny’s Downtown in Cleveland. He has performed with Grammy Award-winning artists, Leonard Slatkin, Kathleen Battle, The Cleveland Orchestra, “The Funk Brothers”, and Jim Dale.

His discography includes more than twenty titles including three with Assistant Concertmaster, Lev Polyakin of The Cleveland Orchestra, as well as the new Original Cast Recording of Caesar The Musical. He began his career as a Musical Director at The Cleveland Playhouse and resides in Cleveland, Ohio with his wife, blues singer, Kristine Jackson. He has two daughters, Sage and Solana Petrone.