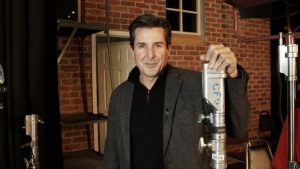 The Greater Cleveland Film Commission (GCFC) congratulates Frederic Lahey on his selection as the inaugural Director of the Cleveland State University (CSU) School of Film, Television and Interactive Media. The process to choose the Director was long and thorough, involving officials from CSU as well as GCFC President Ivan Schwarz.

“Director Lahey is the right person for the job,” said President Schwarz. “Having worked extensively in production, while also leading the Colorado Film School to a position of prominence, he possesses the right mix of academic and industry experience that will start CSU’s program on the right track. We look forward to having a close relationship with Director Lahey and the school as we continue to grow this industry in Cleveland.”

GCFC’s advocacy efforts led to the state of Ohio awarding $7.5 million to CSU last spring to build the first standalone film school in Ohio history. GCFC will continue its efforts to increase the Ohio Motion Picture Tax Incentive, which will not only attract more and larger productions, but bring more jobs and economic impact to the region, and allow for critical production infrastructure like sound stages and production offices.