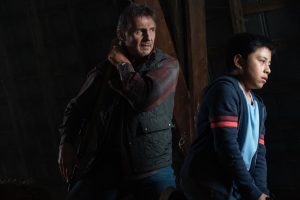 CLEVELAND, Ohio — What happens when your real life exceeds your dreams?

Ask Danny Kravitz. The screenwriter grew up in Pepper Pike and graduated from Orange High School. During the fall of 2019, he found himself on the set of “The Marksman,” his first produced screenplay. The movie starred Liam Neeson, one of his favorite actors of all time, and, as luck would have it, was being shot in Cleveland.