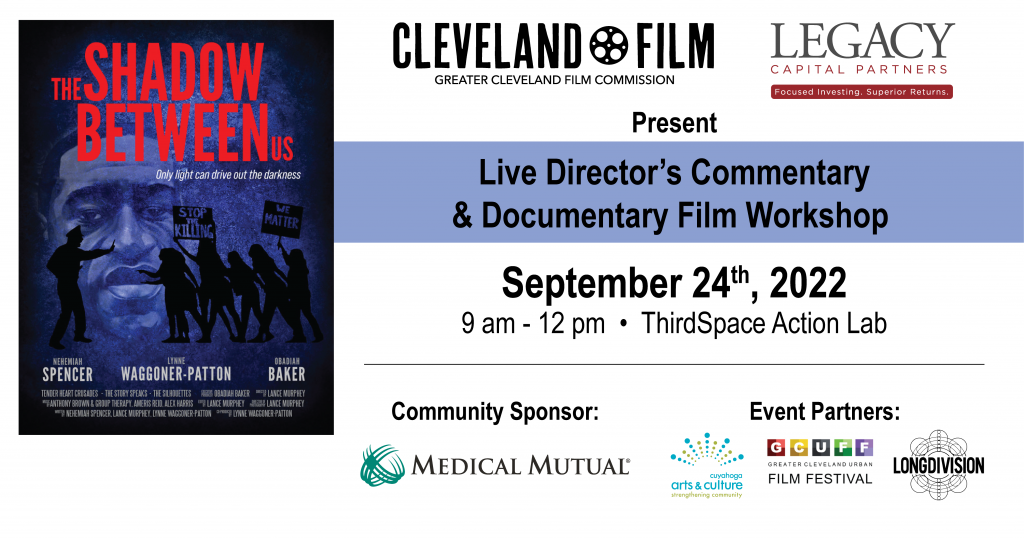 How do people from different backgrounds and experiences come together and find healing when a traumatic event threatens to drive them further apart? This was the question the nation asked in 2020 following the death of George Floyd.

Dance artists around the world answered that question, using their art to start the difficult conversations, encourage empathy, and help others find healing and community.

The collaboration between Cleveland’s Obadiah Baker and The Silhouettes (Gold Buzzer Act America’s Got Talent The Champions 2020) led to THE SHADOW BETWEEN US, a film about overcoming racial tensions by healing the divide. Emmy® award-winning photojournalist and director Lance Murphey documented this partnership for the film.  Drawing on his background covering social and humanitarian issues, Murphey shares the story of Nehemiah Spencer, an award-winning professional dancer and choreographer from Cleveland’s Glenville community.

The film tells the story of Nehemiah, a Black dancer trapped in a pandemic lockdown in Cleveland. He is asked to join a mostly white dance troupe in Colorado to create a silhouette-based dance performance that seeks solutions to police brutality in the killing of George Floyd. Nehemiah had given up dance but finds the courage to travel far from home to participate in the project. The resulting performance transforms all participants in unexpected ways, reinforcing that our shadows are all the same color and that only light can drive out darkness.

The GCFC will host a Live Director’s Commentary & Documentary Film Workshop with THE SHADOW BETWEEN US director Lance Murphey. This event will be hosted at the ThirdSpace Action Lab and include a screening of the film, paused periodically to hear behind-the-scenes stories and filmmaking insights from the filmmakers, as well as audience Q&A. James Robenalt, author of the book “Ballots and Bullets: Black Power Politics and Urban Guerrilla Warfare in 1968 Cleveland” featured in the film will also join the panelists, executive producer and composer Obadiah Baker, and the film’s subject, Nehemiah Spencer. 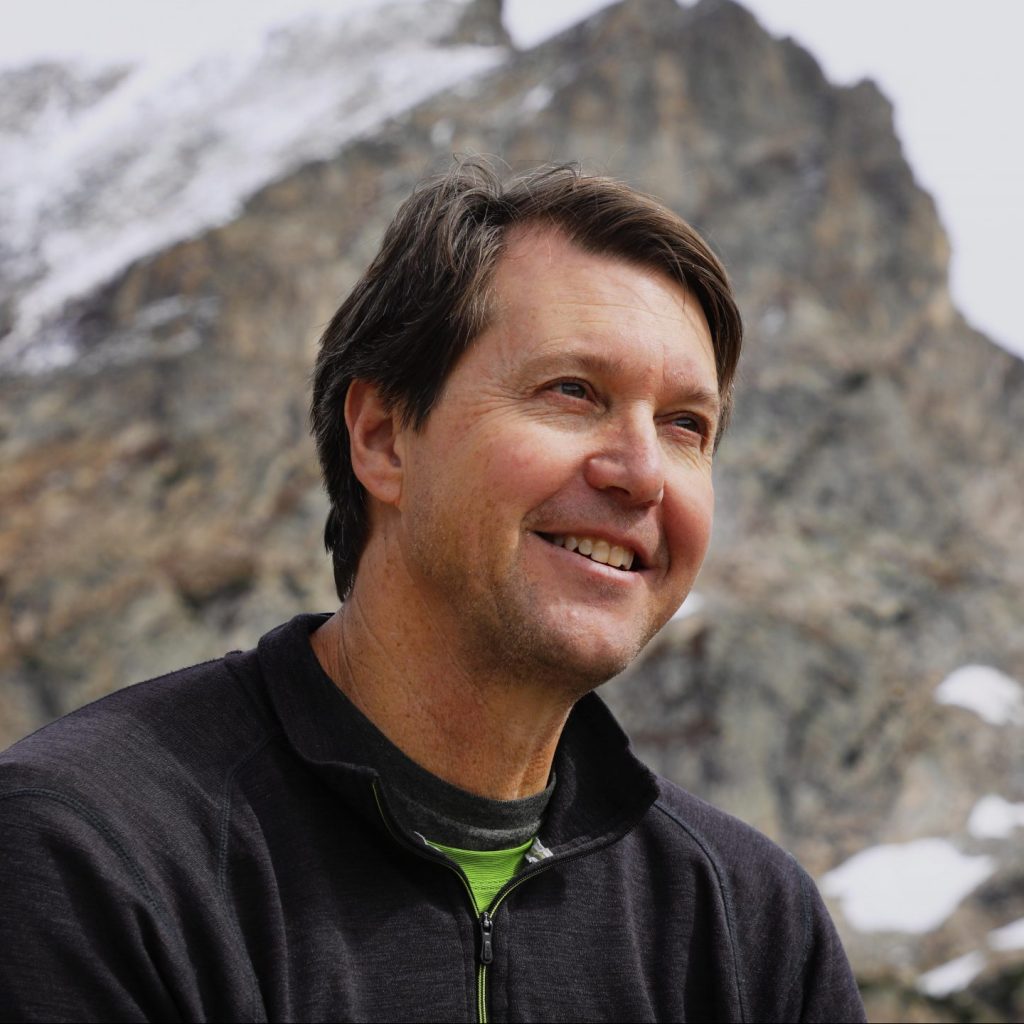 Drawn to filmmaking as a photojournalist, director Lance Murphey’s first documentary film, “Nobody,” told the story of a homeless man running from his demons and finding grace in unlikely places. The film premiered at the prestigious Full Frame Film Festival and was featured on the Dr. Phil Show. Since then, Murphey has produced many short films and documentaries around the world, which have earned three Emmys, a national Addy and been honored by TED.COM as one of 20 Ads Worth Spreading in the World.

Murphey has chronicled many social and humanitarian issues throughout his career, including a years long project documenting a historic pattern of discrimination against Black farmers, which led to a billion dollar lawsuit against the USDA. Murphey’s photography has earned dozens of national and international awards, and his work has been featured in the New York Times, Washington Post and all major media outlets.

A recent collaboration between Cleveland’s Obadiah Baker and The Silhouettes from America’s Got Talent, led to “The Shadow Between Us,” a film about overcoming police brutality and racism through healing the divide between black and white. 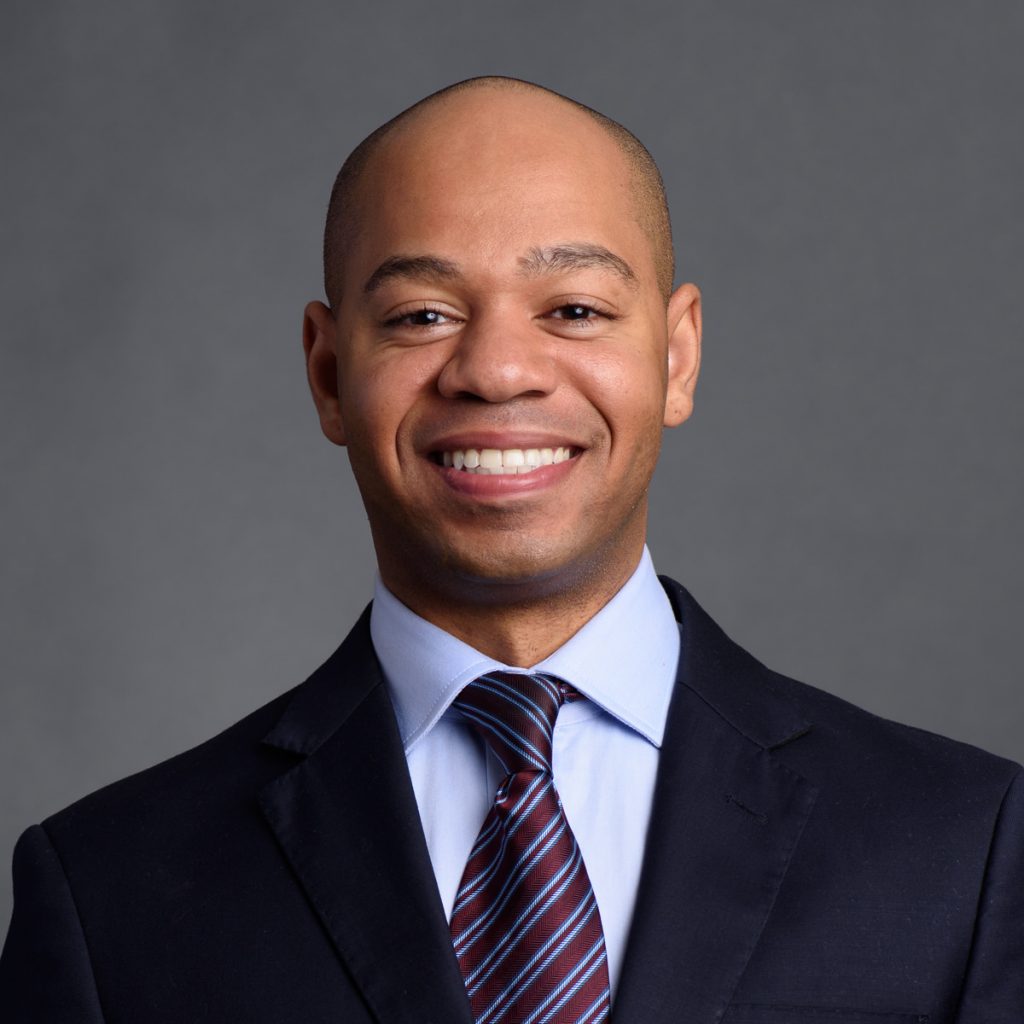 Obadiah Baker (b. 1981) is an American composer and film producer who draws inspiration from film soundtracks and life events. His music creates colorful, empathetic sound worlds that convey strong emotions of joy, sorrow, compassion, and struggle. He often juxtaposes rich harmonies and full orchestrations with passionate melodies and improvisation, reflecting his classical training at Interlochen Arts Academy and Black heritage as a gospel and jazz musician. His musical themes and documentary storylines typically touch on intersectionality, urging listeners and viewers to self-reflect to influence sustainable societal change.

Obadiah is the president and founder of Tender Heart Crusades, a 501c3 nonprofit that services at-risk youth through education and community service. Through his organization, he has made a name for himself as a global community leader, changing lives one note and film at a time. His recent film, The Shadow Between Us, premiered at the 2022 Toronto Black Film Festival, featuring a reduced theatrical version of his piece Winter about the COVID-19 global pandemic. This music won “Best Soundtrack” at the 2022 Shadow Film Festival in Birmingham, United Kingdom. The Bergamot Quartet recently performed the first and second movements—Kyiv and Lviv—of his string quartet Ukraine, centering on the Russo-Ukrainian War in Eastern Europe.

Obadiah has had his music performed by many professional and student ensembles, including, but not limited to, the New England Conservatory Symphony and Philharmonia Orchestras, Prague Orchestra, Bergamot String Quartet, Popebama experimental music ensemble, and Rainey Institutes’ El Sistema. He has also produced four opera buffa short films—Connection Lost (The Tinder Opera), Something Blue (The Bachelor Opera), Someone Like Me (The Facebook Opera), and Rumspringawakening (The Amish Opera)—with filmmaker Adam Taylor of Galaxy454 studios. Current projects include the third and fourth movements of his string quartet Ukraine, a series of Libations short chamber works dedicated to great jazz saxophonists in history, Speechless (The Caveman Opera), an orchestral and choral arrangement of the State Anthem of Ukraine Shche ne vmerla Ukrainy i slava, i volia for an upcoming documentary film, and an arrangement of Lift Every Voice and Sing for Juneteenth.

Obadiah holds degrees in music (B.M.) from the New England Conservatory, studying with Danilo Perez, Fred Hersch, and Michael Gandolfi, a degree in business (M.B.A.) from the University of Arkansas Grantham, and currently a double-degree student (E.D.D. and M.M.) in leadership and management with a concentration in creativity and innovation at Drexel University and music composition at John Hopkins University’s Peabody Institute, studying with Sky Macklay and Kevin Puts. He is also a civil affairs commissioned officer in the United States Army Reserves, currently at the rank of Major (promotable). Recent awards include the Army’s Humanitarian Service Award for COVID-19 relief operations and the Fulbright Scholar award, where he will study the cross-cultural replication and power of shadow dance in Israel as a conflict resolution and global peace intervention technique, focusing on the interplay of Israeli Gaga and American shadow dance on Israeli Jewish students’ awareness of race and identity.
Obadiah now lives in downtown Baltimore, MD, where he continues to impact communities at home and worldwide through his music and films. 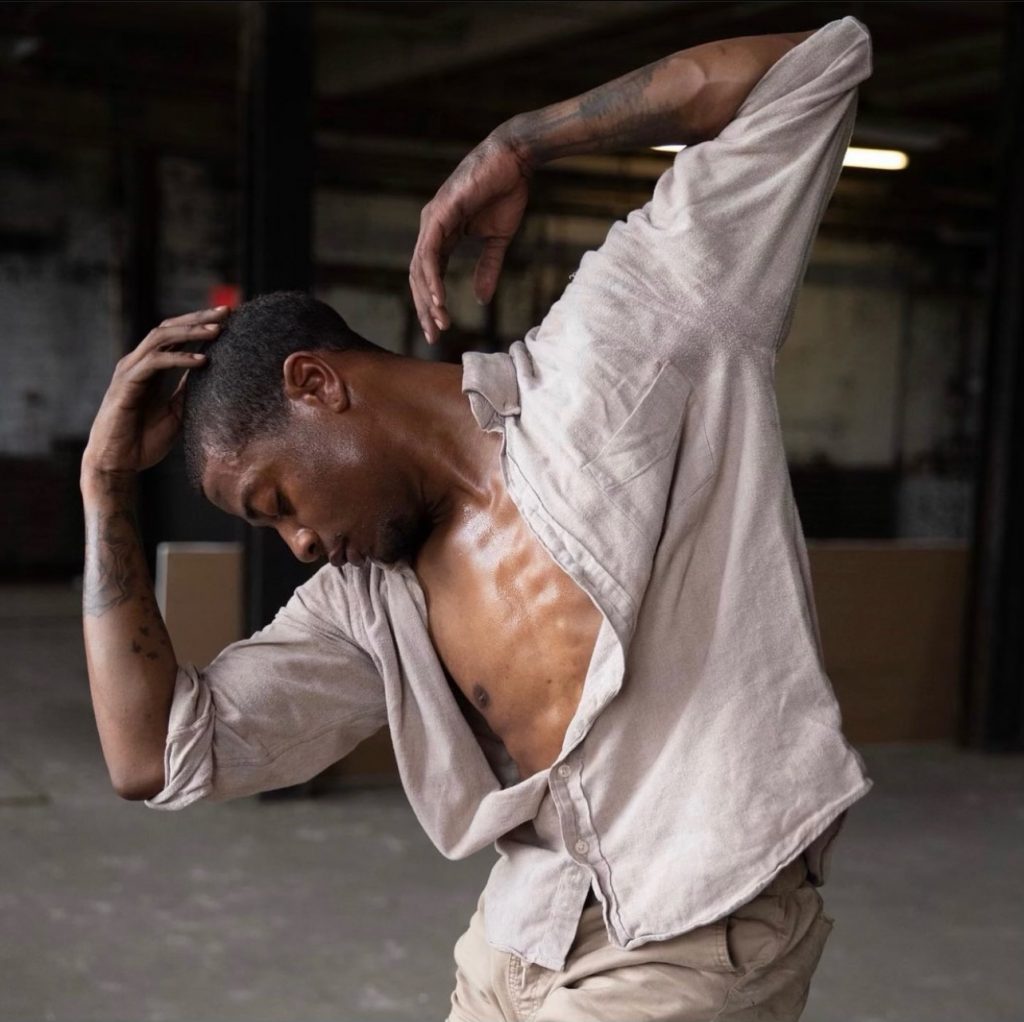 Nehemiah Spencer is an award-winning professional dancer and choreographer from Cleveland, OH. A native of Cleveland’s Glenville community, infamous for the Glenville Shootout of 1968, Nehemiah attended the Cleveland School of the Arts (CSA), where he studied dance. Through overcoming the hardships of poverty and as a Black male dancer, Nehemiah followed his dreams to attend the prestigious Juilliard School in New York City. There, he earned a bachelor’s in fine arts in dance.

Upon graduating, Nehemiah performed as a dance soloist in the Broadway production of The Wiz, directed by Tony award-winning choreographer George Faison. He also traveled the world as a principal dancer with Complexions Contemporary Ballet and a principal with Abraham-in-Motion, under the direction of Kyle Abraham, a recipient of the MacArthur “Genius Grant” Award. Moreover, he also worked with Cleveland dance icons like Dianne Mcintyre, Edna Duffy, and Reggie Kelly, to name a few. Nehemiah also recorded with Jill Scott in her music video Back Together. He also choreographed three musicals: Dreamgirls, 42nd Street, and Memphis. Nehemiah recently worked with America’s Got Talent 2020 Golden Buzzer Finalist, The Silhouettes, in a documentary film called The Shadow Between Us, directed by three-time Emmy Award-Winning filmmaker Lance Murphey and producer and composer Obadiah Baker. This film centers on healing the racial divide in America through shadow and light. This film premiered at the 2020 Toronto Black Film Festival and received numerous awards and screenings worldwide.

Since 2012, Nehemiah has served the Greater Cleveland community with his Nehemiah Project, a summer dance intensive that provided quality and affordable training for at-risk youth. Former Ohio Governor John R. Kasich also recognized Nehemiah in Dance Teacher and Dance Magazine. Today Nehemiah is the Director of Arts at Hope Academy Northwest, working with students from K-8. He also is the Director of Reflections Dance Theater, 2022 inaugural dance winners in the national competition How Sweet the Sound. Nehemiah looks to continue to share his love for dance, community, and teaching with the world and use his gifts as an instrument to propel society forward. 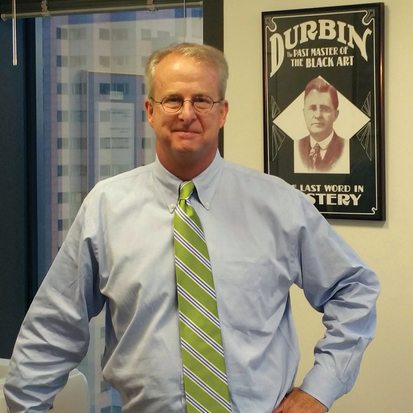 Author of four nonfiction books: Ballots and Bullets, Black Power Politics and Urban Guerrilla Warfare in 1968 Cleveland (2018); January 1973, Watergate, Roe v Wade, Vietnam, and the Month that Changed America Forever (2015); The Harding Affair, Love and Espionage During the Great War (2009); and Linking Rings, William W. Durbin and the Magic and Mystery of America (2004). Robenalt lectures nationally with John Dean, Nixon’s White House Counsel, on legal ethics and the legacy of Watergate. Together they have spoken to tens of thousands of lawyers across the country in one of the most acclaimed continuing legal education programs. Robenalt is a partner at the law firm of Thompson Hine LLP. He lives in Shaker Heights, Ohio. He has written extensively on the presidency, Article II, impeachment, Watergate, abortion and the Progressive Era. His great-grandfather was the register of the United States Treasury under President Franklin Roosevelt and also the first elected president of the International Brotherhood of Magicians. He advocates for an Ohio Presidential Center. He speaks on racism and implicit bias.