GCFC Member, and local filmmaker, Johnny Wu will premiere his film Innerself on Saturday, May 12th at 8:00 pm at Atlas Cinemas Lakeshore 7! 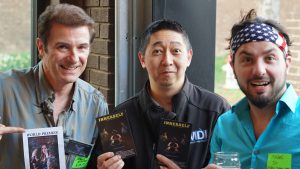 Johnny has been involved in the Cleveland film community since 1998 (the same year the GCFC was founded). He has seen it grow firsthand, and sees Cleveland as a real hub for Hollywood filmmaking.

As an independant filmmaker, Johnny has learned a lot about working in the city with fellow filmmakers. He  appreciates local businesses providing their support and opportunities for local film.

“While challenging myself, and helping local filmmakers, Cleveland needs to have a spotlight in place for studio-run films to be engaged here; the Greater Cleveland Film Commission does that,” Johnny says. “I’ve always felt that, being a filmmaker, we should continue to support the film industry in any capacity we can; if we can’t provide financial support, then we provide other support that we can afford.”

Johnny has always been focused on giving back to his community, which is why he became a member of the GCFC, and he encourages other local independent artists to do the same.

Innerself is a martial arts, musical comedy that follows Ed, a naïve young man who has been bullied his entire life, and finally decides to do something about it. He studies martial arts, develops into an expert fighter and begins fighting everyone – from his bullies to his sensei.  Kicked out of school for fighting unnecessarily, Ed struggles to become a better man. Meanwhile, his new sensei is attempting to take over his former school and is using Ed to do it.

More information on the screening HERE.