CLEVELAND, OHIO — Northeast Ohio is ready for its closeup once again as filming on “Shooting Stars” begins in parts of Cleveland and Akron this month. Based on LeBron James’ autobiography of the same name, the Universal release focuses on the NBA superstar’s childhood years, telling the story of a close-knit group of friends who overcome the challenges of growing up in the inner city and find refuge together on and off the court.

The project is the first major Hollywood production to come to the area since the Netflix film “White Noise” (also known as “Wheat Germ”) starring Adam Driver wrapped in November. It’s also the latest win for the Greater Cleveland Film Commission, the nonprofit that works to attract film and television productions to the region. The production will be here into June and pour a projected $25.5 million into the local economy, hiring crew members, partnering with local vendors and businesses and booking hotel rooms.

To put that into perspective, “Judas and the Black Messiah,” shot here in 2019, had a slightly smaller budget of $21 million and hired 118 local crew and over 3,000 extras, worked with 60 local businesses and booked more than 1,000 hotel room nights during its stay.

“LeBron James is very loyal to Northeast Ohio,” said Bill Garvey, president of the Greater Cleveland Film Commission. “I think he always saw this as a project that needed to film here. But ultimately these projects depend on a tax incentive to come.”

Garvey is referring to the Ohio Motion Picture Tax Credit, which provides productions a 30 percent tax credit on their in-state costs. The state limits the maximum amount of incentive awarded at $40 million a year. “Shooting Stars” is taking up $7.6 million of that.

“We have a steady stream of content being produced here, but we also have more projects that are turned away because of the restrictions of our tax incentive,” he said.

Garvey said the state had to turn away $224.5 million worth of film and television projects over the past year because of the cap on the tax incentives available. In his view, those are opportunities the state can’t afford to lose.

“We want to take advantage of the arms race of the streaming wars that’s led to an exponential increase in the amount of production happening throughout the world,” he said. “There is more opportunity than there ever has been in an industry that is growing more than any other industry at the moment.”

Originally from Queens, New York, Garvey has been in the film industry for 26 years. Before his current role luring projects to the region, he worked on the other side of the equation as a location manager, finding places for filmmakers to shoot their movies and then working on the logistics to make it happen.

His interest in movie-making began while he was a business major at the University of Notre Dame. Needing an elective, the self-described movie buff took a film production class. Fate then stepped in when “Rudy,” the inspiring 1993 sports drama, came to campus to film scenes. Director David Anspaugh spoke to the class. Garvey was hooked.

“Here’s this director in front of me telling us how he makes his living, doing something he loves. It was a foreign concept to me,” he said. “It opened my eyes.”

After bouncing around the country, Garvey and his wife settled in Cleveland in 2008 to be close to her mother, who was suffering from cancer. He quickly realized he didn’t have to be in Hollywood or New York to continue what he loved doing. Not long after his arrival, a producer hired him to scout locations for a super-secret project. It was a big-budget movie set in New York City with elaborate action sequences that would be impossible to film in a city of eight million people. 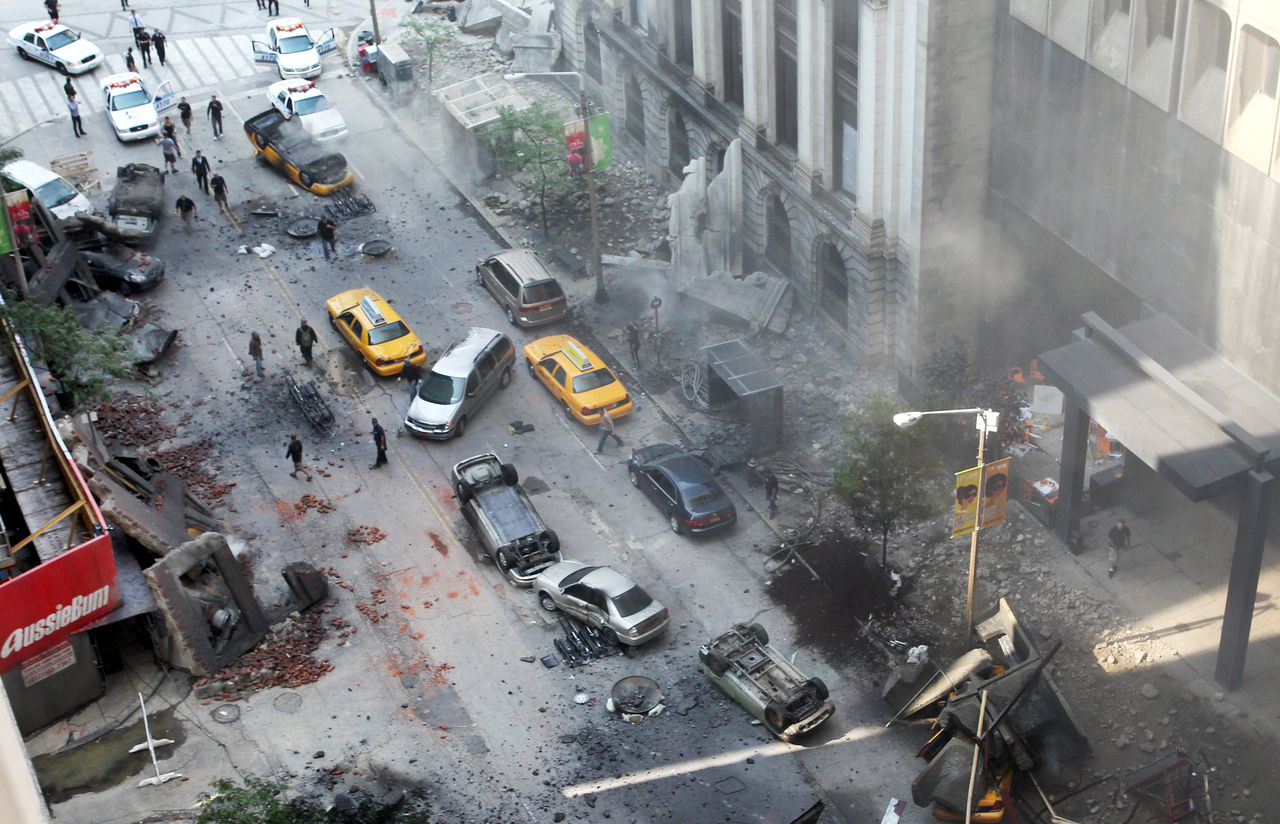 Cars, taxis and trucks were smoking and tossed about like toys during the first day of filming on “The Avengers” movie set on Monday, August 15, 2011. (Lynn Ischay/The Plain Dealer)The Plain Dealer

The film turned out to be “The Avengers.” Marvel originally intended to shoot it in Detroit, but those plans fell through. Luckily, Garvey knew of a place where you could easily shut down streets so Captain America and Thor could fight off an alien invasion, and also stand in for Stuttgart, Germany, where Loki could cause trouble. It was his new adopted hometown of Cleveland, Ohio.

“That film was kind of the calling card that put Cleveland on the map and started a pipeline of other projects coming here,” he said.

Garvey followed that up by bringing “Captain America: The Winter Soldier,” “The Fate of the Furious,” “Judas and the Black Messiah” and “White Noise” to Cleveland. Those efforts plus his existing relationships with companies like Marvel, Disney, Netflix, Paramount, Universal and Warner Bros. led to him being named head of the GCFC last September.

Instead of the buyer, he’s the seller now. His pitch is pretty simple. With its unique and varied architecture, topography and climate, Cleveland can be anywhere the film needs it to be.

“Whenever I’m with a director or producer from out of town and I take them on a tour, I show them all this amazing architecture and I say that’s never been in a movie. They’re shocked because everywhere they’ve ever been, everything’s been on screen,” he said.

He also sells them on the cost of living here. But the city’s biggest asset, according to Garvey, is its people.

“I’ve filmed in many places and you don’t get the welcoming reception that we get here,” he said. “It’s wonderful to be able to go into a community, spend money and people appreciate it.”

Still, studios aren’t going to spend millions of dollars just because we’re nice to them. There are 4,000 projects currently in development and to attract some of them, Garvey said Ohio needs to stay competitive with places that offer higher tax incentives than the $40 million Ohio issues annually. States like Pennsylvania ($70 million), Kentucky ($75 million), New Mexico ($100 million) and Louisiana ($150 million).

“When the tax incentive goes away, so does the spending,” he said.

Garvey is working with state legislators and other stakeholders, trying to increase Ohio Motion Picture Tax Credit and make it more flexible. Since its inception in 2009, the incentive has generated $1.1 billion in economic impact and created over 6,000 jobs. The ultimate goal, he said, is to replicate the success in Georgia, which doesn’t cap the amount of tax credits it doles out or restrict when entertainment companies can apply for them to just two times a year as Ohio does. The result: film and TV production has become a major part of Georgia’s economy with $4 billion of spending annually, which has led to the creation of an infrastructure that now includes roughly 100 soundstages across the state.

“That’s why they’re the new Hollywood,” he said.

Garvey believes the film industry in Northeast Ohio has the potential to become a sustainable, year-round business, too. Some of the pieces of the puzzle are already in place. Studio projects such as “White Noise,” “Cherry,” “The Marksman,” Oscar winner “Judas and the Black Messiah,” and smaller ones such as “The Hunting” and “The Enormity of Life” have given local actors, artisans and technicians valuable experience on set. Film programs at Cleveland State University, Kent State University, Cuyahoga Community College and Cleveland Institute of Art are producing the next generation of filmmakers.

That pipeline includes a few productions scheduled to arrive after “Shooting Stars” wraps. Garvey can’t elaborate on them, but he’s particularly excited about a Warner Bros. feature that will be partially shot here and another project he describes as “high profile.” Stay tuned.

For now, his focus remains on expanding the film industry here and across Ohio. He’s been encouraged by the progress so far.

“There have been so many silos over the years and my main goal is breaking down the silos and getting everybody cooperating as a film community,” he said. “Once we have a higher tax incentive, then we can have multiple projects shooting in multiple places at the same time. That’s what creates stability and longevity.”