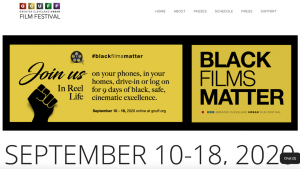 It kicks off Thursday and this year’s theme is “Black Films Matter.”

The festival is in its 9th year, but for the first time, 90% of the festival will be online which executive director Donna Dabbs said she thinks will give people the opportunity to watch even more films.

The festival will showcase more than 70 movies from Thursday until Sept. 18. Those include feature films, shorts, animations, and documentaries.