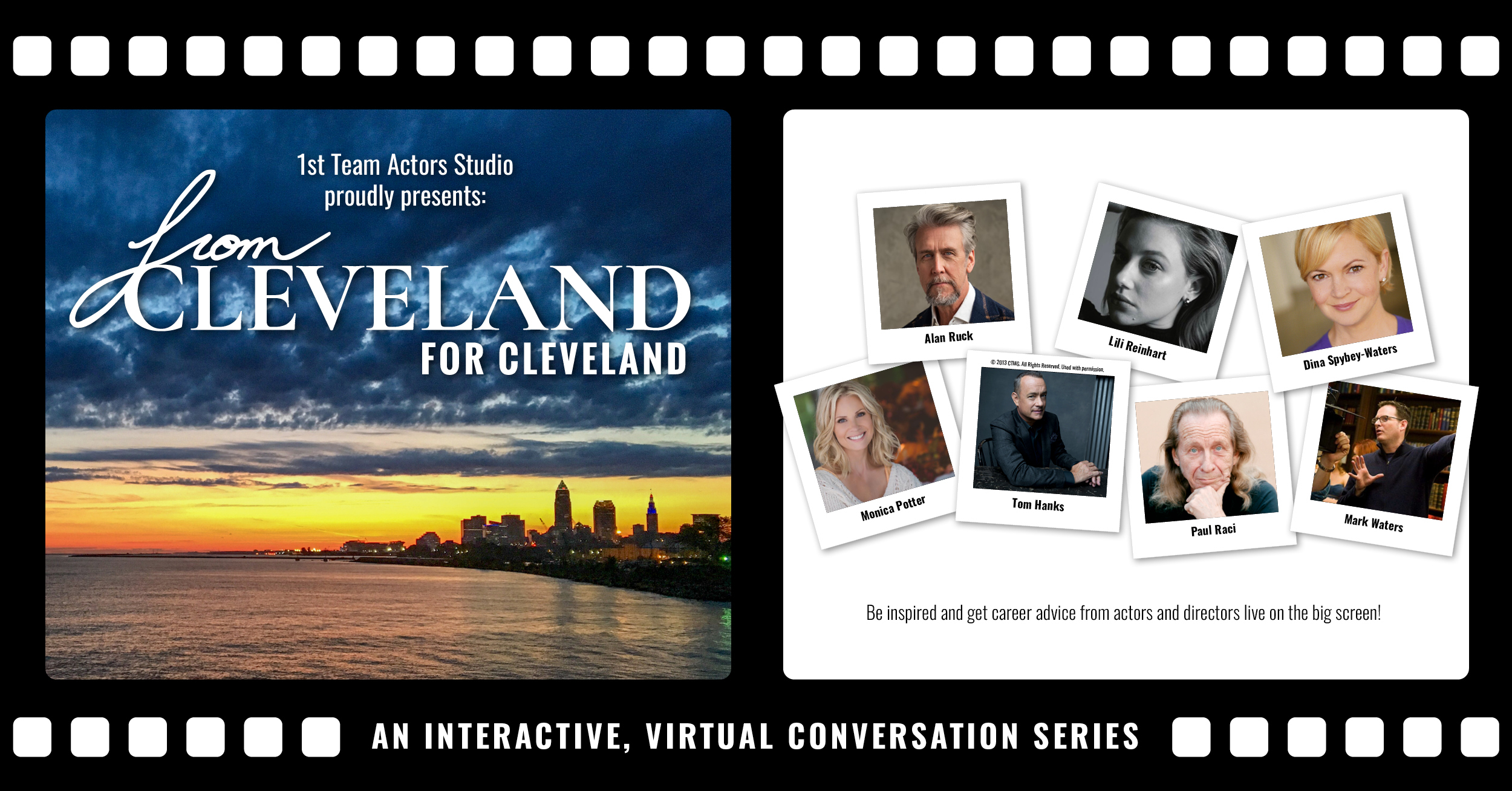 New event series “From Cleveland, For Cleveland” brings big talent back to their roots

If you’re a part of the film industry, an emerging actor or director, or even a fan looking to learn more about how your favorite stars got their start, then the new event series “From Cleveland, For Cleveland” is for you. 1st Team Actors Studio is proud to present this interactive, virtual conversation series featuring Monica Potter, Lili Reinhart, Paul Raci, Mark Waters & Dina Spybey-Waters, Alan Ruck, and Tom Hanks at the historic Capitol Theatre in Gordon Square Arts District.

Each month from June through November, attendees will have the opportunity to hear from this venerable cast of actors and directors, all of which have their own connections to Cleveland. During a moderated talk hosted live via Zoom, each will discuss his or her unique perspective on the television and film industry and give advice to aspiring actors. VIP ticket holders will be able to ask questions of the featured guest and all are invited to network with with their peers at the conclusion fo the presentation.

Doors open at 6:00 pm and the interactive conversation begins at 7:00 pm. A portion of the proceeds will benefit the Greater Cleveland Film Commission.

For more information and to purchase VIP or general ticketing options, click below.

Lili Pauline Reinhart is an actress and producer who is proud to call Bay Village, Ohio her hometown.

She officially began her acting career when she decided to audition on a whim for an Olmsted Performing Arts musical production when she was 12. Many musicals and auditions later, Lili would meet her first manager and subsequently sign with her first agent. Lili is most well known for the role of Betty Cooper in the CW hit series “Riverdale” which has just completed its 6th season. You may also recognize her as the face of Cover Girl for the past two years as well. She has won several Teen Choice Awards during her time on Riverdale and has amassed an Instagram following of almost 30 million people.

In the past two years, Lili has appeared in the critically acclaimed film “Hustlers” starring along with Jennifer Lopez, Constance Wu, and Keke Palmer. She also produced and starred in Amazon’s “Chemical Hearts” film which was the first project that introduced her to the producing side of the business. In the meantime, she has created her own production company (Small Victory Productions) and signed a first-look deal with Amazon Studios for Film and TV. Small Victory will develop original and adapted content for film and television with a focus on modern young adult content that celebrates diversity and inclusivity.
Lili’s next film project to be released will be Netflix-produced “Plus/Minus” which is slated for a release this August. Reinhart can also add the title “Author” to her name as her debut collection of poetry “Swimming Lessons” became a New York Times best seller. Reinhart currently resides in Los Angeles, California with her dog Milo when she isn’t shooting Riverdale in Vancouver, British Columbia.

Paul Raci’s love and passion for music started at a very early age. The firstborn son of Deaf parents, they were concerned that with only ASL communication in the home there would not be enough auditory stimulation to model speech for him.  So they bought a radio, record player and a TV. And sometimes all three were blaring at the same time. Sinatra, Elvis, Paul Anka, Otis Redding, and James Brown were constantly playing in the house. In high school, when the Beatles arrived, Paul ‘s Deaf Mother bought him his first guitar. When he made his first recording, he remembers putting the 45 RPM record on the turn table, and his Mom putting her hands on the stereo, to feel the vibration, and then signing to Paul “Beautiful” When Paul was drafted in the Vietnam war, he joined the US NAVY and did two combat tours on the U.S.S. Coral Sea ( an aircraft carrier ) as a Hospital Corpsman.  When he returned, he started ROCKY, a band with influences of David Bowie, Led Zeppelin, and Aerosmith.  The Band became a favorite in the Chicago music scene. Paul’s mom would often sneak into a venue where ROCKY was playing and made friends with everyone from the bouncer at the door to the bartenders.

Attending the University of Illinois on the G.I. Bill, Paul started to explore acting and the theatre.  He was involved in countless productions in Chicago as a sign language interpreter as well as starting his own company, The Immediate Theatre, as an actor, where he was nominated for a Jefferson Award for his performance in Children of a Lesser God.  He also started to explore “shadow signing” with his partner Joyce Cole at the Kentucky Shakespeare Festival and would often be interpreting four different plays in rep at a time.

Paul Raci is a Veteran, a CODA, (Child of Deaf Adults), a Court Certified American Sign Language Interpreter, a musician, and the lead singer/signer for the Hands of Doom ASL Rock Band, a Black Sabbath Tribute Band. In LA, as an Actor he has done over 10 productions with Deaf West Theater, including Of Mice and Men, Medea, Equus, A Christmas Carol, and most recently the acclaimed award winning production of David Mamet’s American Buffalo in ASL.  Paul has been seen in many TV shows including Baskets opposite Zach Galifnakis, Goliath opposite Billy Bob Thornton, and Parks and Recreation opposite Amy Poehler.

Most recently, Paul can be seen in Sound of Metal, with Darius Marder writing and directing, starring opposite Riz Ahmed and Olivia Cooke.  Paul considers himself to have a Deaf Heart.  Being a part of Sound of Metal has his Deaf Heart overflowing with Gratitude.

A petite, stage-trained blonde adept at portraying naive or off-center characters, Dina Spybey Waters first came to prominence in and won a Daytime Emmy Award for the leading role of an underage teenager in the fact-based HBO special, Lifestories: Families in Crisis: Public Law 106: The Becky Bell Story (1992). In 2000, she married director Mark Waters and eventually changed her professional name to reflect their union. The two collaborated on several projects, including Freaky Friday (2003) and HBO First Look: Just Like Heaven (2005). In the latter film, she delivered one of her best performances as Reese Witherspoon‘s protective, married-with-kids sister, veering adroitly between her trademark high-pitched comedic energy and convincing emotional moments.

Waters earned a B.F.A. in Acting from Ohio State University and an M.F.A. from Rutgers University, before beginning her career on stage. She had appeared in numerous Broadway and off-Broadway plays, including Alan Ball‘s “Five Women Wearing the Same Dress”, for which she earned a Theatre World Award for Outstanding New Talent, “Blue Light” and “The Shawl”, both directed by Sidney Lumet, and “The Iceman Cometh”, opposite Kevin Spacey.

Alan Ruck is an American actor. Born in Cleveland, Ohio and raised in Parma, Ruck became interested in the theater during high school and studied drama at the University of Illinois. Ruck began his career in Chicago primarily on stage as well as doing a few small parts in movies. He moved to New York in 1984 for his Broadway debut in “Biloxi Blues”. Ruck has over 100 film and television credits and can currently be seen in “Succession” on HBO.

Some of his most memorable credits include “Twister” “Ferris Bueller’s Day Off” “Speed” and “Star Trek: Generations”.

Tom Hanks is an award-winning actor, producer, and director. One of only two actors in history to win back-to-back Best Actor Academy Awards, Hanks has starred in over 40 films, including FORREST GUMP, SAVING PRIVATE RYAN, CAST AWAY, BIG,  PHILADELPHIA and A BEAUTIFUL DAY IN THE NEIGHBORHOOD. With his production company, Playtone, Hanks has produced several award-winning TV series and films including JOHN ADAMS, BAND OF BROTHERS, OLIVE KITTERIDGE, MAMMA MIA, and GREYHOUND. Hanks has received AFI’s Lifetime Achievement Award, the Hollywood Foreign Press Association’s Cecil B. DeMille Award, a Kennedy Center Honor, and the Presidential Medal of Freedom.

To say Monica Potter has played a variety of roles in life is an understatement. She’s an actress, producer, entrepreneur, inventor, designer, decorator, homemaker, and mom. And with every project, she brings passion, drive, creativity, and plenty of humor.

Distinctly identified by her portrayal of Kristina Braverman, Monica starred in six seasons of NBC’s acclaimed drama series “Parenthood.” Her emotional performance led to a 2014 Golden Globe nomination, a 2013 Critic’s Choice Award for Best Supporting Actress in a Drama, a TCA Award nomination for Individual Achievement in Drama, and endless parenting questions by the show’s enormous fan base.

Before she left her mark on television, Monica exploded onto the big screen opposite Nicolas Cage in Michael Bay’s “Con Air.” She followed that up by starring with Robin Williams in the acclaimed feature “Patch Adams” and then with Morgan Freeman in the thriller “Along Came a Spider.”

Other bio-worthy credits include “Boston Legal”—which garnered a Screen Actors Guild nomination for Outstanding Performance by an Ensemble in a Comedy Series—TNT’s “Trust Me,” the CBS Miniseries “Reversible Errors,” “The Young and the Restless,” CBS drama “Wisdom of the Crowd, the blockbuster horror classic “Saw,” and the comedies “Head Over Heels” and “I’m With Lucy.”

Monica’s most recent television project was on Amazon’s “Goliath”. She was also seen in a docu-series for HGTV that tracked the emotional and hilarious renovation of her childhood home—starring her favorite ensemble cast… her family. Notably, Monica can be heard on QCode Media’s most recent serialized fiction podcast “Classified” in the role of Doctor Bell.

Monica and her family reside in Los Angeles, California and Cleveland, Ohio.

1st Team Actors Studio is dedicated to bringing Hollywood-caliber training to Northeast Ohio. In addition to ongoing classes, the studio brings in professionals to teach masterclasses and workshops to students of all ages and skill levels. Instructors have extensive training from LA, New York, and other large markets, as well as on-set experience and credits. From directors to agents, managers and actors, our team is uniquely connected in the film industry.